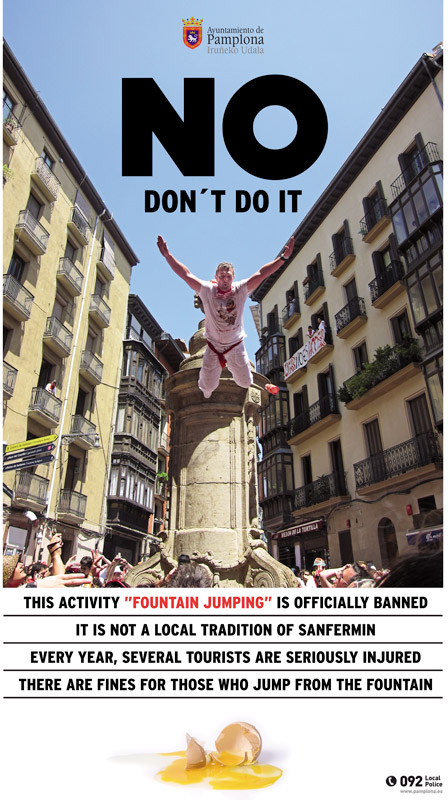 It is well-known by all Sanfermin fans that it is extremely dangerous to jump from the top of the Fountain of the Navarreria during Sanfermin fiestas. In fact, Pamplona City Hall prohibits this jumping but, the more dangerous the event is proclaimed, the more attractive it becomes and this fact is reflected in the mention that the event receives from some of the Travel Agency publicity that organizes trips to Pamplona for the July fiestas. Sanfermin.com, as it is an objective guide to the fiestas, must necessarily point out what is happening and that is what it is now doing.

Jumping off the top of the fountain implies two serious dangers: above all, the danger of injury inherent in the act of jumping from such a height and equally important, the danger created by people who throw things at the jumper, or from slipping on the wet ground around the fountain. As things currently stand, there are two very evident facts, firstly, that those people who jump off the fountain are almost always foreigners, and that the crowd of lookers-on who throw things at the jumpers are almost always locals. Throwing things in this way is just as forbidden by law as the jumping is but there exists a kind of dangerous concept of “popular legitimacy” which seems to support the idea that this public punishing of the wrong-doing jumper is acceptable practise. Nobody seems to mention this side of things nor speaks of the inherent dangers in such practise. In this generic video of the Sanfermin.com canal of YouTube it looks almost appealing to make a jump from the fountain. And sometimes, they are not plastic bottles and sometimes there are cases of glass bottles being thrown as well as lumps of ice cubes. And the added danger is, if the objects thrown miss their target, these things could hit innocent bystanders who are standing around the square or who are to be found at the bars on the far side.