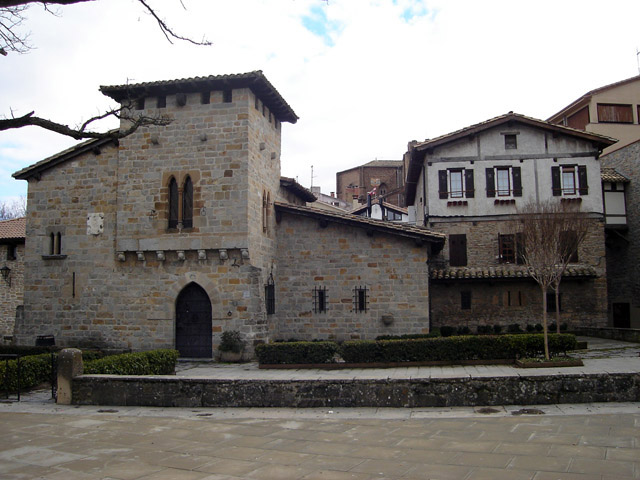 The old city walls around the Baluarte Del Redín are a wonderful place to pass the time of day. Surrounded by the ancient Medieval buildings and with wonderful views across the foothills of the Pyrenees and some of the Barrios of Pamplona, what better location to see Pamplona at its best. Up here during fiesta it is often a lot quieter and more relaxed than in the cramped, narrow streets and the busy plazas around the Ayuntamiento and Jarauta. Not only that but there is the ancient Meson Del Caballo Blanco to enjoy – a fine example of Pamplona’s historical past where you can sun yourself and have a nice drink and tapa.

But just hold up a moment! This building is not quite what it seems. At first sight the Caballo Blanco fits in nicely with the other structures around it, but actually it is a bit of an imposter. Back in the late 1950s when the Calle Nuevo was being modernised to build the Hotel Maisonnave, a 16th Century palace; The Aguerre was the victim of this. But rather than get rid of the building totally, the stones were used to build the Meson Del Caballo Blanco, which includes retaining the 500 year old cross of Mentidero which was originally sited in Calle Mercaderes.

So this very old looking building has actually been in place for no more than 50 years. Proof, if ever it was needed, that in Pamplona not everything is as it seems.