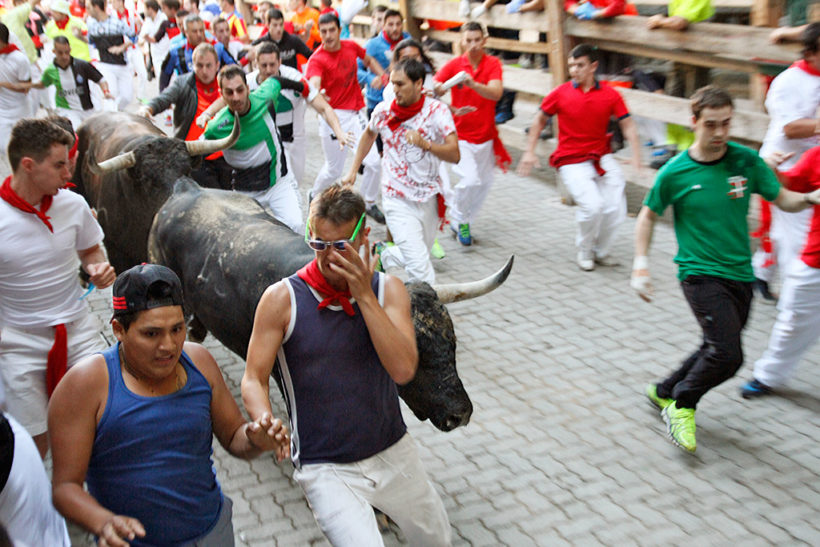 The Running of the Bulls event is like a big catwalk, full of colorful T-shirts, caps, cloaks, and – today we have seen the proof – glasses. Most runners run with the minimal apparel – a pair of trousers, a T-shirt, sneakers… to ensure that nothing superfluous might upset them during the running. Other runners might wear something for luck, like one of the regular runners in Estafeta who always wears his cap and who, in the previous running of the bulls, even took a moment to adjust his cap as he ran just in front of the horns of the bull. Some another runners turn up for the event with some gimmicky thing of other that they have acquired in the early hours previous to the bullrunning.

At today’s Running of the Bulls, perhaps expecting some irritation or bother from the sun and the sunlight, one runner came down the stretch at the entrance to the bullring, with a pair of bright shiny green glasses on his head. As the chasing Conde de la Maza bull drew closer, the same glasses were falling over his eyes. As the runner continued his tight run, almost squeezed up against the fencing, he found time to relinquish the glasses and pull aside just before the bull could charge him. Some real style. With glasses.

Curiously, the City hall norm is a bit hazy and simply states that “It is prohibited to carry inappropriate objects for the good of the Running of the Bulls.” And runners must not wear “inappropriate clothing or footwear at the bullrunning.”