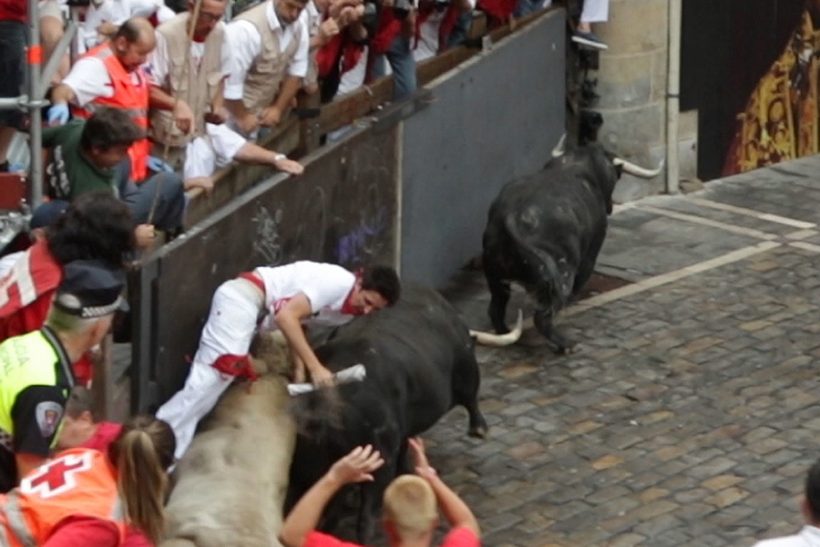 The most dangerous moment of the fifth Running of the Bulls of Sanfermin 2017, featuring the Jandilla bull-ranch, took place at the corner of Mercaderes, where, yet again, an imprudent runner found himself alone and stationary on the left side of the fencing, just where the bulls inevitably take the turning into Estafeta Street. However, despite the awesome images, this young runner from Australia escaped unscathed from the frightful tossing he received.

In spite of the fact that year after year this mythical stretch of the Running of the Bulls is signaled as a “no-go” area for runners, because the bulls always charge along this side, this morning saw a runner all alone and totally at a standstill right on the path where the oncoming bulls would soon appear. The runner stood still with his rolled-up newspaper in hand, looking calm and serene. The first leading black bull tossed him high in the air. A beige-colored bull charging along behind arrived just as the runner fell across its back and the left horn of this bull seemed to jab him in the gut, before the runner fell to the ground.

In spite of the fact that the runner seemed to have suffered an important goring, a TV reporter from RTVE informed the viewers that, after a quick initial check-up made by The Red Cross, the runner had come out completely unscathed from the incident. Still, no doubt his heart-beat accelerated somewhat and he had more than a few sighs of relief after that incident. If this runner ever takes part in another Running of the Bulls, we can only hope that he will now know where not to go if he wants to take the Mercaderes turn ever again.