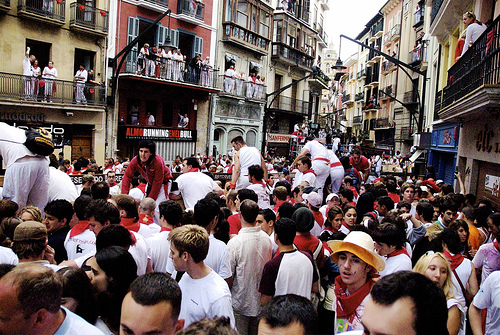 An endless flow of sentimental and romantic words have streamed across the pages of books and via the internet on the subject of San Fermin and the Running of the Bulls. The love for this fiesta is almost universal, and yet all is not well and under the surface lies a darkness that takes many forms. Over the coming months a series of articles by invited writers will explore this dark side.

One of the common complaints now heard during fiesta is that it has become so crowded, and that these numbers are bringing the fiesta down, taking something away from the atmosphere and making it worse.

The crowds have been growing steadily for years. In 1923 when Hemingway first visited Pamplona, both the city and fiesta were very different to the ones we know now. Sure, many aspects are the same, many buildings are the same, but much has changed. Hemingway entered a city whose population was around 30,000, (it sits around the 200,000 mark today). Instantly you can see that the numbers in fiesta would have been much lower back then; even taking into account the swell of people coming into the city from surrounding towns and villages. There are currently 16 official Peñas in Pamplona, but only one, (La Unica) has survived from Hemingway’s time. No doubt other Peñas have been and gone during these years but there certainly was no need for 16.

Hemingway would also have looked upon a Pamplona without many of the sprawling developments that grew up in the 20th century during the “ensanche” or widening that gave birth to the blocks and streets we see in Burlada, Rochapea et al. In the 1920s Pamplona was still largely confined to the constrains and geography of the old city walls. It was only when these were breeched, (in some cases literally as parts were demolished), that the expansion caught real momentum. The population of Pamplona has grown steadily, (and for the large part, sharply), since the late 1940s. By the time Papa visited his last Sanfermines the population was up around 130,000 and growing and the fiesta was attracting more and more people from near and far. You could say that by the time he left for the last time the damage had already been done.

But it is the more recent growth of fiesta that needs some explanation. In the past 20 to 30 years the fiesta has ballooned and there are many factors that have contributed to this. Firstly the growth of foreign visitors which has been made much easier with the massive expansion and improvements in international travel. The number of students and backpackers has been expanding since the early 1990s. Add to this the improved transport links, budget airlines and cheap rental car prices and it is not surprising that numbers are so high.

Consider also the promotion of Sanfermines. The Ayuntamiento has presided over a deliberate and co-ordinated growth of the fiesta over many years; knowing full well that more visitors equals more money into the coffers, and it makes sense to publicise San Fermín as much as possible to attract as many visitors as possible. It’s all about the money. The GDP of Spain has been rising steadily in line with population meaning that the public has more money to spend and more funds to lavish on their fiestas.

San Fermín is self-publicising, especially the running of the bulls. In these times of the internet, youtube videos, facebook contacts and images galore the modern members of the generation that needs experiences to tick off need look no further than organised tour groups to bring them to Pamplona.

Let’s face it, the growth was inevitable. Like it or hate it the crowds are here to stay.