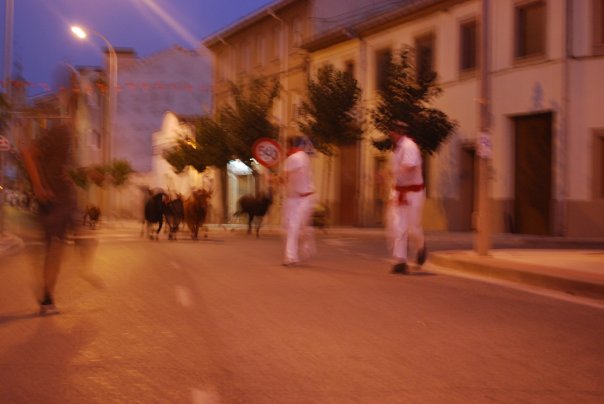 “When someone sings his own praises, he always gets the tune too high.” Mary H Waldrip.

“I don’t believe in elitism, I don’t think the audience is this dumb person lower than me. I am the audience.” Quentin Tarantino.

Every year during San Fermín it seems that one particular toy, trinket or gadget is more popular than the rest. They become fashionable and take off like no others. A few years ago this ‘honour’ went to the loud-hailers (or megaphones) that became so irritating they were eventually banned.

These loudhailers were unique. What they did was quite remarkable as they allowed the individual to lift their voice above the rest of the crowd; to be heard, to be able to express themselves. It was truly liberating…in theory. In truth the outcome was that everybody had a lot to say and none of it was worth listening to.

The modern technological world of data, social media and smartphones has allowed our voices to be heard on a wider scale and to a greater audience. A runner can tweet his last thoughts at 07:59, record his bull-running experience on a Go-Pro, then upload the video via YouTube and Facebook to a global audience by 08:05.

Whatever happened to running for the sheer hell of it? Didn’t Helen Keller say “Life is either a daring adventure, or nothing”?

Nietzsche would sympathise. As human beings we yearn for meaning. Our existential minds function on a risk/reward balance and so if a runner takes the risk he damn well wants the reward in return. He wants recognition. He wants affirmation and he wants to be admired by all his peers. This is natural and understandable but should runners embrace this or even heavily promote it, or should they minimise it and step away from it in favour of something more humble, something more personally intimate and, at the end of the day, something more enlightened?

What many runners forget is that the encierro is not a competition. There are no trophies, awards, points, leagues or championships. To attribute some kind of classification or hierarchy becomes both arbitrary and artificial. Remember that a first-time runner with no experience has just as much right to be on the streets as a seasoned runner of many years. As long as they follow the rules they take their own chances and the true contest is with themselves and themselves alone. Instead the running community has evolved and has made the mistake of turning people it admires into heroes and heroes into gods.

Now runners aspire to a number of things; to be part of a perceived ‘elite’, to run without a break for decades, to get that perfect photograph of the perfect run, to be in the newspapers or pinpointed on TV and be called out as a great runner. All of these things are a part of the process of moving away from the encierro as being personal and individual. Instead this is a move to a different set of egotistical motives where the encierro itself becomes secondary to the celebrity that comes with it.

When we deify people they become infallible and we close our minds to the reality of the world around us and them. We then aspire to be like these people but do so with these closed minds. It is an illusion and one that leads us down a road towards the celebration of ego and not the celebration of the soul. It is not alegría.

Similarly, when we choose to declare ourselves to be members of an elite, when we make our films and write our books then we are arrogantly claiming to represent something which we do not own and which we were not chosen to speak for. We should consider with great care the implications of standing up and shouting about it through our loud-hailers. We should be careful about what we claim to be. There are plenty of other voices that are much quieter but may be more knowledgeable and may hold a contradictory view to our own. We cannot claim to speak for everyone, and we cannot declare ourselves to be great.

As George RR Martin wrote; “Any man who must say ‘I am the King!’ is no true king.”

While I appear to be condemning, I am also appreciative of this encierro world. Pamplona’s encierro is truly remarkable. Yet, if I could go back in time I would do things differently with the hindsight of experience. I made my own mistakes, not least spending far too much time trying to be recognised as a runner and not enough time simply enjoying myself. If I rewound the 10 years on the streets of Pamplona I would not have worn the blue shirt that I hoped would help me stand out in photos, and my own book would have turned out very differently with a greater emphasis on the encierro history and without the inclusion of the focus on individual runners or my own self-indulgent opinion. I learned to view encierros differently thanks to travelling wider than Pamplona. This was no overnight revelation, but a gradual transition and I realised that when I stopped worrying about getting a good photo, stopped worrying about having a perfect run then I started to enjoy the encierros much more than I ever had.

I recall running one morning in Tafalla down towards the Plaza de Toros. Three of the toros had strung out in a line. I was just behind another runner I knew and just in front of a pastore. The uninterrupted view of the toros that came gliding past us just inches away, was spectacular and memorable. My fellow runner and I embraced at the end of the run in mutual recognition of a wonderful experience of being so close to these animals in full flight and to be able to drift away and watch them vanish through the main gate. Then it was over and we went our separate ways. I have no photograph of that encierro, There was no TV coverage, it did not make the newspapers. Nobody congratulated my running and nobody cared except for my friend who shared it with me. But what I have and always will have is the knowledge that I ran with pure joy in my heart and with no other motive.

Let’s be honest, no regular runner follows the same mental course from very first run to very last. When we first step out into the streets we simply want to try it out, to survive and come home safe. As we run more we may choose to try to perfect a certain stretch, to push ourselves closer and closer or we may choose to hold a certain point time after time. Later on in life we may abandon the idea of running well in favour of simply wanting to be out there to enjoy the atmosphere and get a glimpse of the toros. We each make our own choices in the encierro and as such our attitudes and behaviours are then open to being praised or criticised, and in a very Kiplingesque way we should be able to deal with both outcomes equally. Our own choices dictate whether or not we are the type to seek out the encierro celebrity or to shun it. In the end, neither are wrong, but my argument is that a runner can be acting within the rules but outside of the “spirit of the encierro”. My personal belief is that certain attitudes and motives are not truly within the spirit of the encierro even if they are perfectly within the rules. However, no single person makes this call; we do not own the fiesta, we do not own the encierro.

Adding layers of additional complexity to the world that surrounds our encierros detracts from the true heart of the event. We should always go back to that datum which is the fundamental foundation of why we are there; streets and animals. All of the additional celebrity is a complication that distracts us from what it is that joins us, drives us. As I am fond of saying to some of my friends, and heavily paraphrased from the famous British rock climber Ron Fawcett:

“Walk out onto the course of your favourite encierro. Stand in the middle of the street and trace the line of the run going away from you. There, you’re home.”

You may surprised to learn that you don’t need to make a loud noise to be a success. Some of the quietest people are those having the most fun, and some of the best encierro runners are people we don’t know, and will never know.

Run as you will, but if you can then reach into your heart and run because of the joy that sits there, and “not for the sake of a ribboned coat, or the selfish hope of a season’s fame” as Sir Henry Newbolt put it. Put the Go-Pro away, turn your smartphone off and then run for yourself and run for fun. Or more simply; run as you wish to run, but put the loud-hailer down.