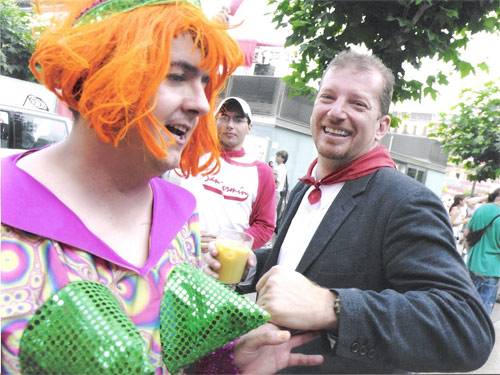 ntroducing
01/02/2007. By Katxi
This month I would like you to read an article by a guest writer: Rick Musica. Rick is from Chicago, he lives by the beach in Fort Lauderdale, Florida. Rick is a Flight Attendant for American Airlines, and at 40 years old Musica is still single, (he claims that no woman will put up with his love of all things Pamplona).
Rick is happy to talk about what makes him tick and would like to share this article with you, after which he’d love to have you buy him a beer, so look him up!
Fiesta
For many people, running a marathon may bring complete jubilation, while for others it’s exhausting just thinking about it. Trekking across the Himalayas may be blissful and serene to one person and completely insane to the next.
No matter what the event, if it is something that inspires, intrigues, or makes you “tick,” you just do it. And then there is the Running of the Bulls! Some things just defy logic. And for nine days in July, most logic is left on the outskirts of a town called Pamplona. When you mention Pamplona to the casual observer, many could not find it on a map, but you mention the Running of the Bulls, and quickly, everyone knows exactly where Pamplona is! But how many of the 2 million plus visitors every year really get to experience fiesta?
Millions of tourists flock to Pamplona every year to check off “Running with the Bulls” on their list of life’s events not to be missed. Sadly, many never venture past the madness of Plaza Castillo. There is so much to Fiesta that it is virtually impossible to see everything that this party has to offer.
And that is the beauty of Fiesta! Let’s face it, most people come to Pamplona the first time to say they “Ran with the Bulls”. Maybe it was Hemingway who brought it to their attention. Maybe it just really is the greatest place on the planet! But whatever the reason, they come. Some never leave; ever! What makes people come year after year after year? It’s very simple. Many people would say the Bulls. And that is a very good answer. But to many of the people who have been coming for years, (10, 20, 30 40, 50+), it’s the people.
Many of the “foreigners,” myself included, came that first time for the Bulls(that story is for another time), but many return, year after year, for the people! The hospitality and friendliness of the residents, and to a major degree, the visitors, is extremely unique! Fiesta may be only nine days long, but the friendships last a lifetime! Fiesta is the ultimate gift.
It is always giving. No matter what you’re looking for, at some point during the week, Fiesta delivers! But what you take from it, depends on what you give to it! If you are lucky enough to be from Pamplona, this love of Fiesta starts at a very early age, like birth! Despite the “vast” amount of adult beverages, (alcohol) available and the outrageous percentage who take full advantage of that availability, Fiesta is still very much about the kids(and those of us who never grew up).
Running with the Bulls makes many people “tick.” Dancing until sunrise in Plaza Castillo makes many people “tick” Partying up and down San Nicolas all night makes many people “tick.” Closing down the Savoy every night, that makes me “tick!”
So what are you waiting for? What makes you “tick?”