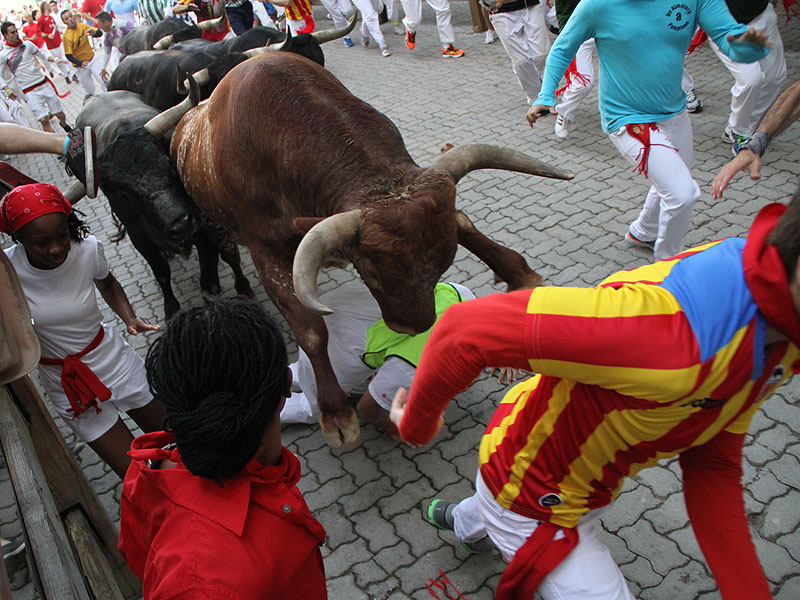 Since 2011 Pamplona City Hall is using the pertinent technology that allows the participants in the Running of the Bulls to be counted. In 2011, 20.500 runners in total took part in the eight Sanfermin running of the bulls this year. In 2014, the last year, two out of every three runners is taking part for the first time in their lives in the event and that some 56% of the participants each day are foreigners. See 2011 survey details.

The Running of the Bulls which was carried out by Pamplona City Hall and the figures tell us that two out of every three runners is taking part for the first time in their lives in the event and that some 56% of the participants each day are foreigners. This is the highest figure ever for foreigners up to now. The figure was 54% in 2012 and in 2013. In addition, the round figures for Sanfermin 2014 tell us:

In addition, it is possible to extract some further interesting figures and some that contradict the belief that a higher number of runners on the course means a higher risk: The Miura Running of the Bulls on the 14th, with 1.414 runners, registered the lowest number of runners of the whole week, and yet it turned out to be the most dangerous and with the highest number of injuries registered.The Running of the Bulls with the highest number of participants was registered on the Sunday, 13th of July with 2, 924 participants, but which showed the same number of injured as on the 8th and the 12th.

In spite of these figures there were several experienced runners who complained about over-crowding on the course being worse than ever. And this leads us to introduce a new concept in the statistics of The Running of the Bulls – the concept of concentrations of runners.

In 2014, an excessive number of runners seem to have gathered on two stretches of the course – namely, at the end of Estafeta and at the Telefónica stretch leading down into the bullring, according to comments from several runners. This new aspect will be analyzed in a later text.

Runners in the 2014 Running of the Bulls

The procedure of the counting of the runners was explained by Pamplona City Hall as follows: “The figures reached on the runners arise from an examination and count of the photos and video cameras located along the length of the course and taken by the Municipal Police just minutes before the start of each day’s bullrunning.”

Origins.  56% of the runners from this year’s Sanfermin bullrunnings were foreign:

According to the surveys carried out by Pamplona City hall, 739 runners (8% of the total) of The Running of the Bulls were from Pamplona, and 6% from other parts of Navarra and some 30% were of Spanish nationality. For sanfermin.com 14 % were locals.