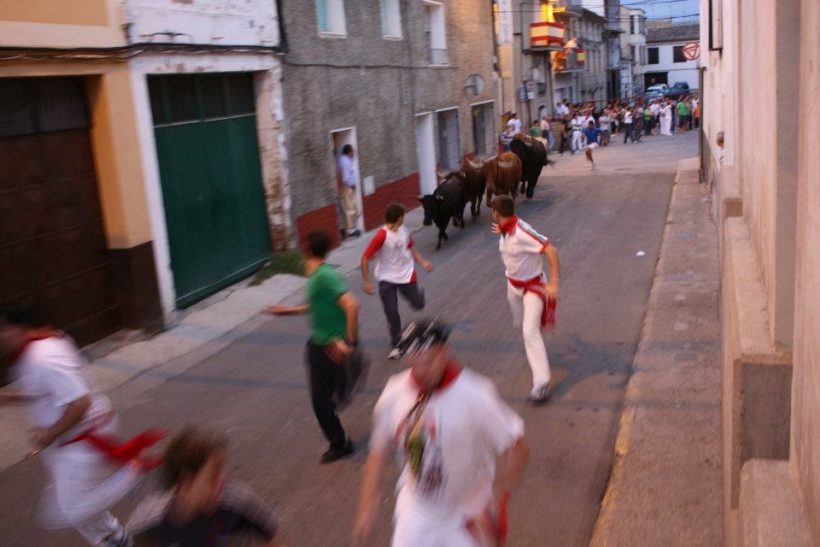 A few years ago I went alone to Navarra in September to photograph the fiestas and to run a few encierros while I was there. Staying on the edge of Pamplona my morning drive daily took me south and west to Peralta, Olite and other typical Navarran towns where the fiestas come later in the summer. It was a colourful but sober week as I took hundreds upon hundreds of photographs. Later I realised that, despite being there, enjoying my time and occasionally meeting friends, I was not truly in fiestas but was on the periphery. I was an outsider looking in, poking my lens towards a familiar world but staying right on the threshold. Even when I put the camera down to have a drink or to run I was conscious of being alone, being on a schedule and being being restricted. I came back from Navarra with some beautiful photographs and some nice memories but with a sense of having been on assignment rather than on holiday.

On one of the mornings in Peralta I had a very scary but ultimately rewarding encierro – full pelt with nowhere to go and the horns of a toro closing in very fast as I timed my exit to perfection and breathed sighs that were both relief and exhilaration. It had been my best run of the week, the summer and probably much longer. In that post-run turmoil of emotions and memories I wanted what most runners want; I wanted to share it. It is a very human thing – we like to break things down and analyse them, to get perspectives, to relive and re-enact. I didn’t want to share to boast about the run, I just wanted to go through the process. But I was alone. So I shared my encierro with a caña and a coffee in a little bar and later, when the adrenalin had worn off and my need to share was gone, I drove off to the next fiesta feeling that, somehow, the experience was missing something. I felt as Charlotte Bront? did when she wrote; “Happiness quite unshared can scarcely be called happiness; it has no taste.”

The very notion of sharing almost hints at its own reward. Any modest event can be heightened by the multiplication factor of others having gone through the same thing. Mass participation events always seem to generate an incredible vibe or movement that far outstrips the quality contained therein, such to the point that people just want to be able to say that they were there.

Not that there is anything wrong with solitude. Thoreau said; “I never found the companion that was so companionable as solitude.” The truth and purity of an experience holds its integrity far longer if not shared – it is less likely to be tainted by exaggeration, embellishment or downright dishonesty. This is because our experiences are both fragile and fleeting. From their birth they instantly growing, distorting and gradually moving away from us as we try hard to hold onto them, keep them fresh and not lose their value. We share them to try to maintain or even increase their value – ultimately to keep them alive.

In our world of social media, instant data and the associated hunger to expand our personal brand, it is easy to share. Experiences fly around the globe in an instant, shrinking that world and allowing us to share on a phenomenal scale. And my, but we do like to share! We share updates of our every movement, our meals and every “funny” video uploaded to YouTube. We share philosophies, challenges and political viewpoints. We share our love, our hate and our indifference. The world is in a sharing boom, yet trawl through all of that data and what is its value? When you look back at the volume of content you have shared over the last 10 years or so, just how much of it is still alive for you in the same way? How much of it would you share all over again?

I have shared a picture on social media a handful of times. It is a picture of me with two other friends on the opening day of fiestas in Tafalla, Navarra. We are wearing the traditional fiestas clothes, clutching drinks and singing our heads off. It is a wonderful image of a wonderful memory of a wonderful moment for me and I have obviously found it worth sharing more than once. Yet, the value is not in the sharing online as those who were not there cannot add to its value and those who were, already appreciate the value. What keeps that moment alive is the memory of the day itself and the warmth of the friendship that exists.

“Even though friends say they are interested in your life, they never really want to talk about you as much as you want them to,” said Charise Mericle Harper, and this hints at the belief that sharing can be a law of diminishing returns – the true intrinsic value is only represented by the picture. Look at the works of the surrealist artist Rene’ Magritte – he challenged us to look at things and to assess what they truly are, what they truly mean, what they truly represent and ultimately if they are worth what we think they are.

Something shared stays alive in its purest form for only a short time and what follows is that desire to keep it alive. Truly we don’t do that online but in our hearts. A couple of years ago our small group was in Buñuel in southern Navarra. We were running a few modest encierros. One of my dearest friends, and one I go back to my first year in Pamplona with, was with me and we were running in a quiet section of the streets. The dice roll fell favourably, the Gods of the encierro smiled on us and we ran up the street almost side by side, the pack of horns closing steadily, but almost benignly and we stepped out of the way calmly and together as the herd shot up towards the church of Santa Ana.

It was a moment we shared. We turned to each other and smiled with the mutual happiness and mutual understanding of a nice run that had gone well. “That’s why we do this,” I said to my friend, “that’s what it’s all about.”

We didn’t need to go over the run in detail. The value was much more philosophical than that. It was a nice run and we had shared it in the moment. No amount of analysis would improve it. Racking up hundreds of “likes” on Facebook would not give it extra value. Holding it in our hearts with a smile would be enough to sustain it.

There have been so many other trivial, short-lived, personal and fleeting moments, whimsical moments even, that I have shared in the 15 years of fiestas of Navarra, Spain and beyond. Imagine a time running down the street with a friend and singing the lyrics of a Rolling Stones song at each other. How do you share such a thing beyond the pair of you without somehow diminishing the true value? How do you explain the laughter gained from a comment in the moment, an atmosphere, a sudden piece of music, an amusing incident? Sharing is voluntarily given but also voluntarily received and while we can dictate the medium in which we launch our content, we cannot dictate how it will be interpreted. As Antonio Porchia said; “I know what I have given you…I do not know what you have received.” Often our good intentions will simply be met with ambivalence or worse, utter contempt. That is often the price of sharing. Sometimes the old ribald comment of “you had to be there,” is absolutely correct, so why try to breathe artificial life into something that has none?

I am with Jose Panate-Aceves and John Hayes with their; “Discover the fulfilment of intimate relationships with flesh-and-blood neighbours and teammates in a concrete place and time, and we escape the pressure of mainstream media to channel intimacy only as a virtual embrace.”

Somewhere in between the loneliness of solitude and the loneliness that drives over-exposure to the world through social media is where the true value of sharing sits. Only we can decide where that actually is, but perhaps the final judge is in reflection. Ultimately there is a beautiful joy in having shared something wonderful, but not over-shared it.