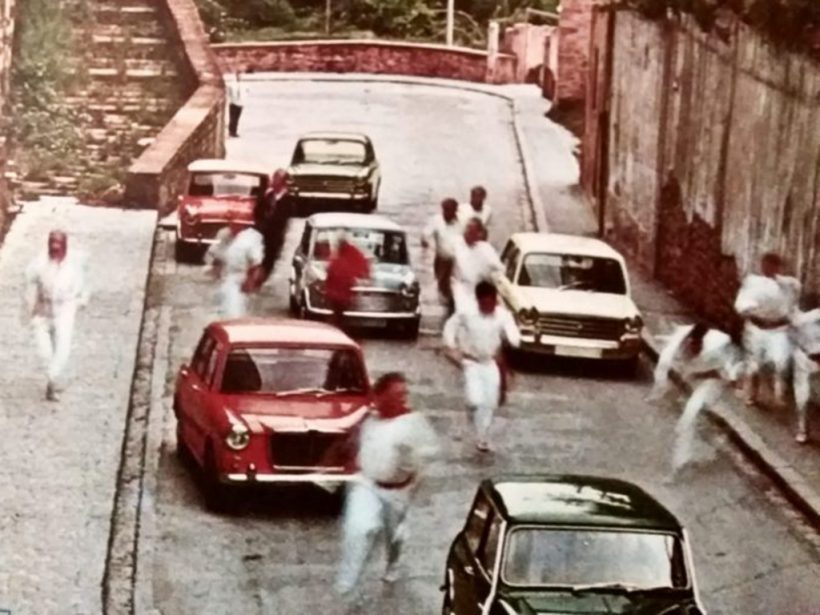 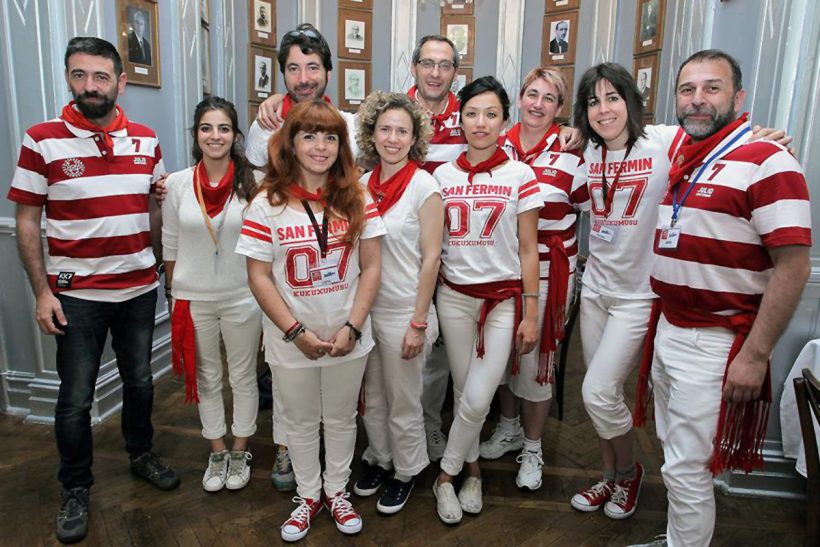 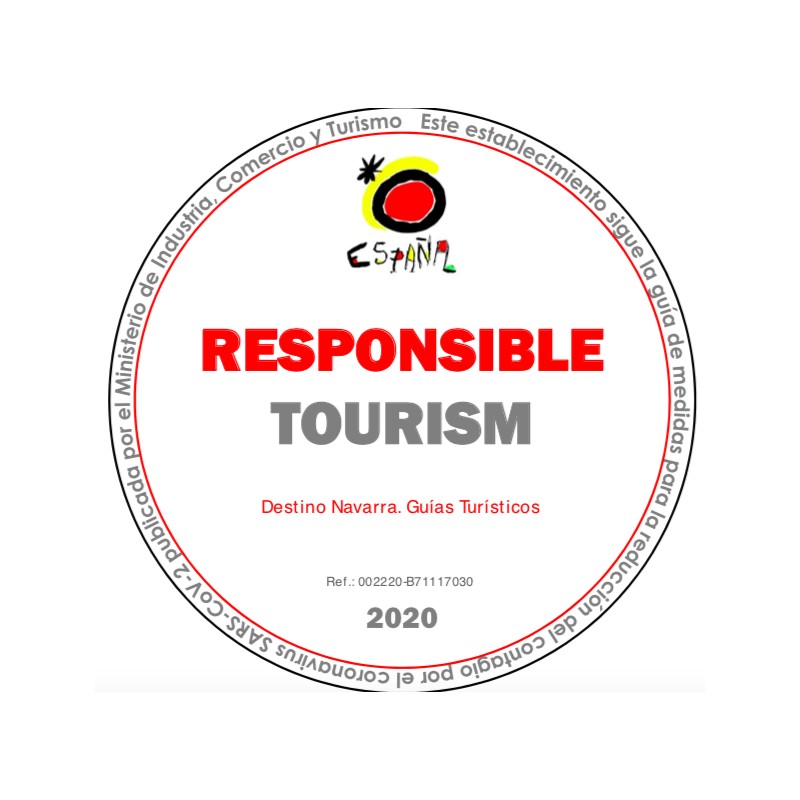 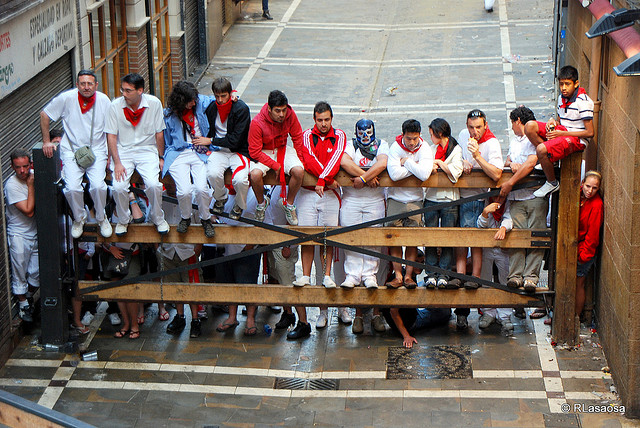 “When looking back doesn’t interest you anymore, you’re doing something right.” Anon.

Around a decade ago there was a lot of dissatisfaction aimed at the moves to make the encierro safer around La Curva. The use of a coating on the street to give the bulls more grip was at the heart of this change. Whether or not it was the only factor, there was certainly something going on and morning after morning the bulls seemed to be going around La Curva cleaner than they ever had, the occasional exception noted. At the time I wrote a piece asking; “What future now for La Curva?” The famous “threading the needle” run from the doorways of Mercaderes and up onto Estafeta was gone, perhaps for good. The photographers massed on the barriers are still able to capture images fit for the newspapers, but the heyday of running the curve is gone.

This has caused a lot of heartache but also a lot of denial as runners cling on to the past and find themselves trying to reproduce it, but only end up standing the street as the arse-ends of cattle move swiftly away from them. There are runners who want a return to the old days and would rather the manada broke up on the walls of the famous curve, but it seems that the current state is here to stay, for a while at least.

Pamplona and the fiestas have been changing for as long as anyone can remember, and even longer than that. In some ways the changes are glacial – a small element here and there – a new feature, a new rule, a new bar, a new venue. Other changes are swift and sure but are absorbed into fiestas with barely a second glance. Remember when the bandstand was abandoned for the huge stage in the Plaza del Castillo?

Other changes feel more significant such as the bulls on La Curva or the red line down on Santo Domingo.

Over the years there have been some very dramatic changes. The txupinazo was nothing like the spectacle it is now and evolved through various stages, including a man letting off a rocket in the Plaza del Castillo surrounded by a small group of bemused children, eventually reaching the mass participation event it is now. The encierros have also moved hours not once but multiple times to reach the 8am start that is in place now. High kerbstones and round cobbles have been replaced by flatter pedestrian areas and even the encierro route has changed significantly, the last time being in the 1920s.

Some will argue, and with justification, that the changes are not always justified and are often for more sordid reasons. In Pamplona this will often come down to money and reputation. The Ayuntamiento does not want to have the stigma of deaths on its hands and so is likely to keep making changes to ensure the encierro is safer and safer – the cost of popularity. Other changes are to extract every last Euro from the pockets of the million people that turn up to party in the old city. It is certainly the case that not all changes are for the better, no matter how inevitable they are, and not all changes are done with an honest and transparent intent.

Many changes are received on a personal level. Old timers will particularly bemoan the loss of Casa Marceliano on the Calle Mercado off Santo Domingo. This bar and hostal has a kind of legendary status among the long-standing fiesta lovers as being a famous hangout, bed for the duration of fiestas, or perhaps just one night, and spiritual home of a number of fine American and Western bull runners until it was closed down in 1993 and absorbed into the council buildings. Old timers will wistfully talk about the good old days and the strong implication is that if you never drank in Marcelianos then your history is not worth considering. An elitism grows up around the past as a clique of the chosen ones looks down patronisingly at the newcomer wannabes. Yet all is in constant flux and the fashionable bars often fade out of favour as other places drift into the sphere of influence. It is not uncommon to see lone old timers sitting grimly outside Bar Windsor, gravely clinging onto the past.

It is understandable. Humans have a reluctance to change and to move on. There is a very natural desire to yearn for “the good old days”, but we do this with blinkers, ignoring or forgetting those parts of the past which, if we had to live with them again, we would find intolerable. John Green rightly said that “Nostalgia is inevitably a yearning for a past that never existed.” Memory is selective and tends to favour the positives over the negatives. We view the past from our comfortable middle age, our affluent self-confident and our assumed wisdom, forgetting that 20, 30, 40 years ago we were not affluent, confident or wise. Sure, we were young, but we did not truly know what to do with it and now we are left mutter variations of the classic lines from Elizabeth Akers Allen; “Backward, turn backward, O Time in your flight, make me a child again just for tonight!”

Karen Ann Kennedy sums it up very nicely when she says:

“There is a difference between thinking about the past and living in it. Sometimes we live in the past because it’s familiar – we know what happened; there are no surprises.”

She goes on to say:

“Living in the past is a problem because it robs you of the opportunity to enjoy the present.”

I would go a step further when it comes to San Fermín. Living in the past only encourages a new generation to venerate something they never witnessed, to aspire to something that is long gone and to disown the present. In doing so this deprives us of the honest happiness of the future.

Whenever we are faced with change we go through a curve taking us from denial, to resistance, to acceptance and finally to moving on. How quickly we move through the change curve depends on many factors, not least how invested in the change we are personally. We can move through quickly, unconsciously even but if things go wrong or we hate the change then we can be stuck in different stages like an old timer, sitting alone outside a bar, still thinking that it’s 1969.

That’s not to say that there is no place for nostalgia and romance. These are a pair of benevolent old souls that visit us from time to time. We should always humour them, listen to them and smile at their stories, but then we should wave them farewell until they pass our way again.

San Fermín will go on changing and there may be some intolerable changes to absorb. Consider that in San Sebastian de los Reyes they have moved the encierro to 11am. Imagine that in Pamplona if you can. And, horror of horrors, one day we may have to face the ultimate change in the loss of the encierro totally. Younger and younger people will come to fiestas and they will care less and less for your history, your traditions, your stories and particularly the way you think fiesta ought to be enjoyed. What will you do? Will you stubbornly hide away under the shadow of huge parasol, mulling over the past, or will you embrace the change?

“The only way to make sense out of change is to plunge into it, move with it, and join the dance.”