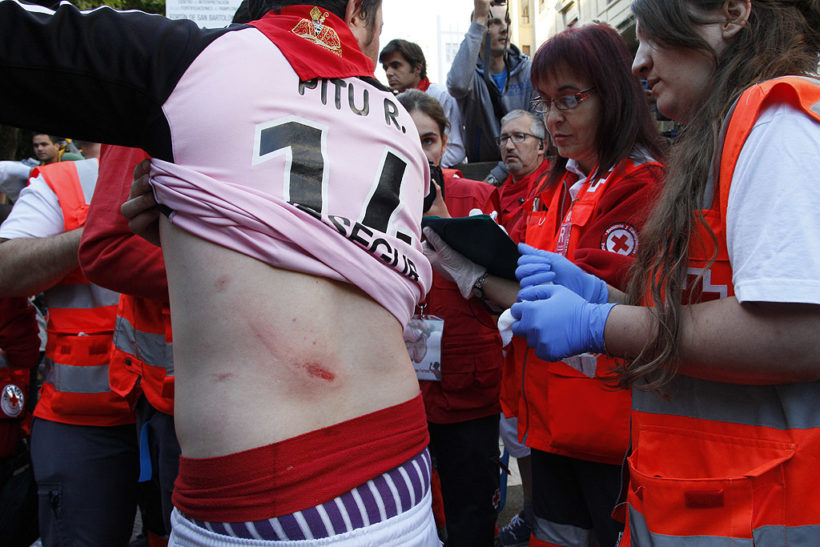 The horns of the fighting bull can kill. We know this if only because down the years, there have been more than a dozen deaths in the Pamplona Running of the Bulls. But it is much more usual for the horns of the bull to cause an injury, perhaps to open a 20-centimeter hole in the body, maybe to slice through a vein, possibly to ravage some vital organ or rip apart the guts or some other internal part of the body and to leave a victim with a long stay in hospital.

Yet the same horn can also give you the slightest of scratches, as if it were gently caressing you. At today’s Running of the Bulls, a runner was awaiting the bulls on the right side of the fencing at the Telefonica section and he was just a hair’s breath away from being sirened off to hospital in an ambulance. But that never happened. As he stood in his black and pink football shirt, he was caught by one of the Fuente Ymbro bulls as the animal gently stroked its horn across the back of the runner, without attempting to stick it in. When he was examined by the medical team, just the slightest of scratches could be found on his back, and just the slightest of treatment was needed before the runner could freely walk away.

This is what happens when the horn of the bull caresses the body with its horn; a gentle wound that you can show off without having the hassle of being taken away to hospital.