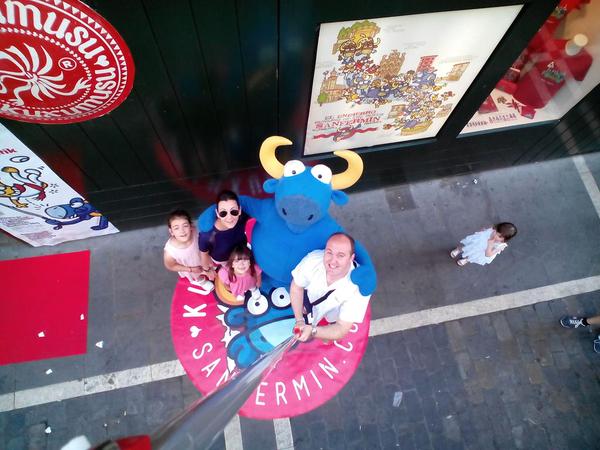 In order to celebrate the final calendar step leading to Sanfermin fiestas, and taking advantage of the “Red and White” night organized by the commercial association of the Old Quarter of Pamplona on Friday 5th of June, we brought Mister Testis along with us in order to let the general public try out some selfie shots with him from some new angles and unusual altitudes. The best selfie snapshot would be awarded a T-shirt from the latest Sanfermin collection created by Kukuxumusu.

The famous Kukuxumusu blue bull was on parade from 17:30 p.m. to 20:30 p.m. outside the door of the Kukuxumusu store at no. 75 Estafeta Street, inviting all the passersby to take a #OverselfieSF which is – for all of you who missed the chance to go there – a selfie from all of 4 meters in height. Gradually, the most daring among the public began to warm to the idea and soon, even the most hesitant were queuing up to have a photo taken with Mister Testis at the daring height of four meters.
All the photos came out real cool and, no doubt, more than one person ended up with a stiff neck, but we all had a great time of it along with Mr. Testis. From all the selfies that were submitted, the winner was the selfie taken by Manuel Méndez. The ‘Paloselfie’ T-shirt from the Kukuxumusu Sanfermin collection goes to him! Congratulations, Manuel!