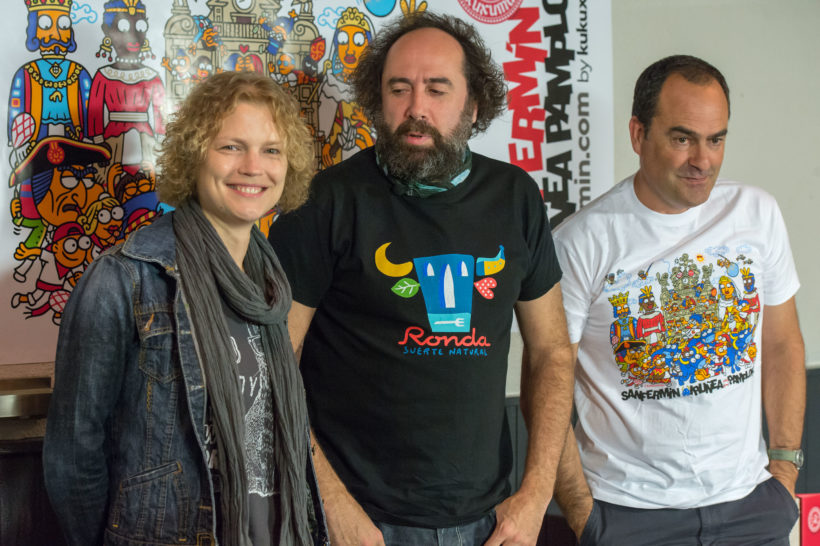 The Russian painter, Anna Nelubova, will receive the XI Guiri Award from Kukuxumusu during Sanfermin fiestas this year. The firm confers this award each year to a foreign visitor who has stood out for their passion and support of the Sanfermin fiestas.

Born in 1979 in Moscow, Neluvoba is a singular case within the bullfighting art world, given her origins. She came to Spain for the first time in 2007 as just a simple tourist, but she discovered the world of bulls and she became enthralled with the fighting bull and its deep-rooted tradition. Ever since then, she returns as often as she can and to hold exhibitions of her paintings which are always related to the world of bullfighting.

Last year she discovered Sanfermin fiestas for the first time and was deeply impressed by the explosive combination of party atmosphere and the respect and admiration for the fighting bull. In 2014 she will return to Pamplona, and she will have an exhibition of her work held at the Maisonnave Hotel.

The handing over of the Guiri Trophy will coincide with the traditional celebration date for the Foreigners – Guiri Day on the 10th of July, when homage is paid to all the foreigners who come to fiestas. The event will take place at 12:30 p.m. in the Europa Restaurant in Pamplona.

In addition to Guiri Day, another of the traditional Kukuxumusu events will also be held this year in fiestas. This is the Kiddies Bullrunning event with its fourth consecutive edition taking place once again for all parents and their kiddies. This year the event will take place on Wednesday, 9th of July at 19:00 p.m. outside the Kukuxumusu store located at no. 19 Mercaderes St. and it is open to all kiddies who wish to take part.