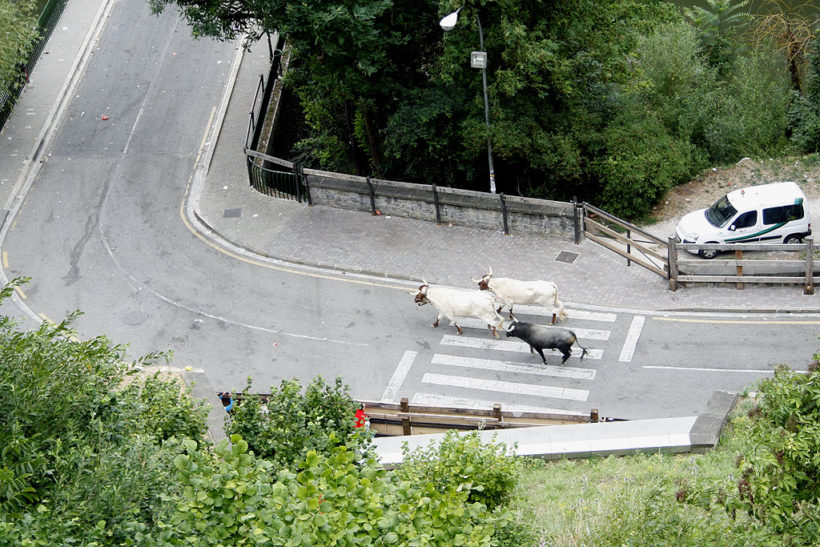 This morning’s Running of the Bulls, with the José Escolar bull-ranch, will go down in the recent history of this event because of the bull that came out of the pen with its siblings, but after running a few hundred meters up the Santo Domingo slope, it decided to turn back round and it ran back to the pens where, surprisingly, the gates still remained opened. This bull remained in the pens and took no further part in the Running of the Bulls, which was completed by the five other bulls.

This unprecedented situation created uncertainty and tension among the runners – many of whom count the number of bulls that pass – as well as the bull-minder staff – who also need to closely control the number of animals as they pass. On hearing the alarming news, some of the bull-minders and runners ran back down to the pens to see how the situation might be resolved. After some moments of uncertainty, and after rejecting the possibility of repeating the running of the bulls with just this single bull and using some steers to pacify the animal, it was finally decided to keep the bull in the pens in Santo Domingo.

However, to take the bull up to the bullring in the afternoon for the bullfights, the problem is that the truck cannot get into the pens in Santo Domingo, which is only used on the eve of each running to keep the bulls in readiness for the following day’s running. For that reason, it was finally decided to clear the road that leads back down to the pens in the Gas area, outside the city walls and from where the bulls are brought up each night on the eve of their bullrunning. In the company of some steers, today’s bull was brought back down to the proper pens where the bulls from the different bull-ranches are normally kept without any mishaps in a kind of bullrunning in the opposite direction. Here, it will be easy for the truck to maneuver to pick up the bull and take it to the bullring for the afternoon bullfights.

At mid-morning, Pamplona City Hall held a press conference where it justified the decisions that were taken. Mayor, Joseba Asirón, and councilor, Aritz Romeo stated that the gates of the corral were opened so as to ensure that the animal would enter and get off the street.  Furtherermore, they revealed the fact that plans were in existence for these unforeseen situations and that a special truck is kept in Chapitela St. for the Running of the Bulls events and it contains tranquilizing darts to immobilize any bull that could be a danger to the public.