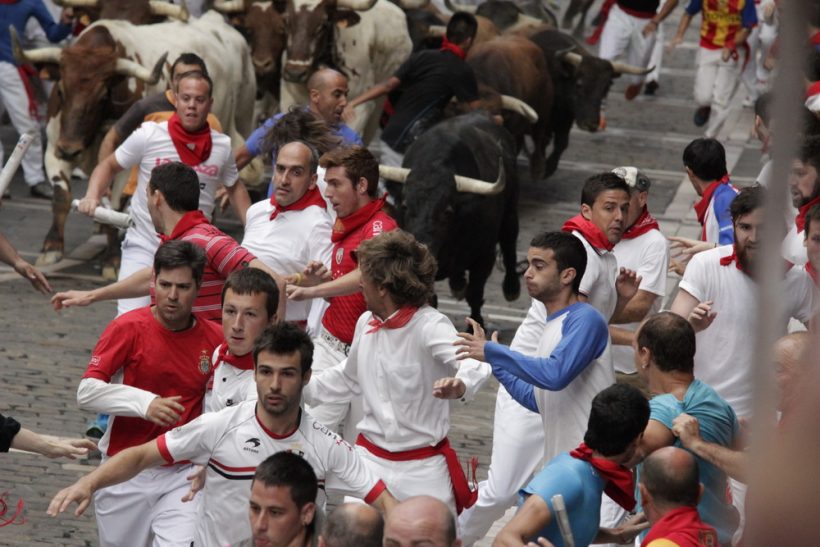 You will wonder how there can be different durations of the same confinement and that is why we are going to explain it.

To begin with, since we regularly calculate the speed of the bulls for the statistics, we take into account the exact time and the correct distance. They are regular variables that must be calculated with the same criteria in order to be able to compare them with each other over time.

1-.Our measurement of the confinement in meters goes from the door of the corral of Santo Domingo, to the door of the bullpens of the square. We do not take into account the interior space of either of the two pens. That distance measured by the center of the street of the entire route and the center of the square, up to the gate of the corrals, is 875 meters. The measurements were made with a wheel odometer calibrated after the renovation of Calle Estafeta and it was revised with the renovation works of the alley.

The distance of the running of the bulls used by sanfermin.com is 875 meters

There are two segments where the bulls run alone, as is the beginning of Santo Domingo and, if there are no legs or reckless people, from the center of the plaza to the entrance to the bullpens. We consider everything lockdown. If a pastor has an incident in the plaza, he is injured in the running of the bulls; If a runner can’t open up in time upon reaching the plaza and keeps running, he’s in lockdown. That is the average that we take into account for speed averages, etc.

2-.And once we have the distance, let’s proceed to calculate the time to establish averages and speeds. We do not take as reference the sound of the starting rocket. Generally we correct one to two seconds, until the first bull’s horn or halter shows through the door of the Santo Domingo corrals. In the same way, we do not take into account the sound of the rocket that warns that the bulls are in the bullring. The running of the bulls does not end for sanfermin.com until the last member of the starting herd (either bull or halter) has entered the corrals. If a bull has to be picked up by the tail halters, that bull will mark the end of the running of the bulls. If one tame is delayed from the initial start, that halter marks the end of the race.

It is for these reasons that the times of the running of the bulls on sanfermin.com generally differ from those on TVE. If we did not do it this way, we would not be able to calculate the average speed of the herds as faithfully as possible.

In the confinement of the bulls of Puerto de San Lorenzo on July 7, 2019, it can be verified that the herd takes four seconds to leave since the clock starts. In addition, at the end of the race, we consider that another second is given away. The official broadcast time is 2.41. For sanfermin.com, it is 2.36, which is the actual time that the bulls were running. With that data, the running of the bulls was completed in 2 minutes and 36 seconds. Which is 156 seconds.

The formula for speed is distance divided by time, which in this case would be V=875 meters/156 seconds. This gives us 5,608 meters per second, which in kilometers per hour is 20.18. If we take the official TVE time as a reference, with five seconds without a race, it is 161 seconds, giving 5.434 meters per second and 19.56 kilometers per hour. We understand that this time is not real because it has five seconds in which the bulls were not on the course, offering incorrect figures to compare with other running of the bulls. We hope that is clear.