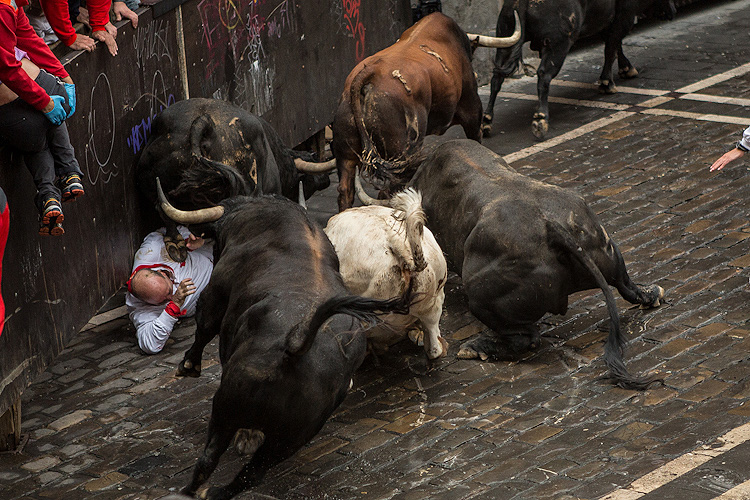 The single goring at today’s seventh Running of the Bulls of Sanfermin 2016 took place at the entrance to the City Hall square just at the end of Santo Domingo, but perhaps the most awesome images from the event are found in the stampede that one runner suffered right at the corner of Mercaderes.

Yet again today, and there are have several instances this year, the bulls slipped up and fell at the corner of Mercaderes. This morning a shower of rain fell just about one hour before the start of the Running of the Bulls event and perhaps this explains the fact that most of the bulls slipped up on the wet ground. Unfortunately, today one runner was flattened by the sliding bulls against the protecting wooden hoarding located at this point.

As can be seen in this short video from Manu Corera and from the sequence of photos taken by Maite H. Mateo, the first bull knocks down the runner, and once on the ground, the rest of the pack stampede over the runner, without actually charging him with their horns. The same runner was quickly given medical treatment by The Red Cross. A gash to the head was one of the obvious consequences of his encounter with the Nuñez del Cuvillo bulls.