The Kukuxumusu Drawing Factory toasted a homage to the Fallas from Valencia in this fourth edition of the Jai Day, in a celebration held today right in the heart of the Sanfermin fiestas. Over a three-hour event, the public were handed out some 600 servings of paella cooked by the Valencia chef, Rafael Vidal and to close the celebrations, a four-meter-high ninot made by Vicente Tornador, a professional from Valencia, was burnt.

The event opened around seven o’clock in the afternoon with an official opening made by Koldo Aiestaran, a founder-member of Kukuxumusu, who justified the decision to homage the Fallas for this fourth edition of Jai Day because “they represent another universal form of enjoying fiestas and of expressing the culture of a people”. Aiestaran highlighted the Fallas for “the humor of the ninots and social criticism expressed in popular humor”.

Immediately afterwards, the chef and paella expert, Rafael Vidal, , well-known for being an advocate of a standardized recipe for the Valencia paella, began to make two giant-sized paellas which were later handed round to the public in attendance in the Baluarte Sq. in Pamplona. Meanwhile, the experienced carpenter from Valencia, Vicente Tornador, began to construct a four-meter-high ninot which represented a runner and the popular blue bull, Mr. Testis. This was designed by Kukuxumusu and built by the Valencia carpenter at his workship in Burriana.

All the while, the event was enlivened by the brass band, from the Valencia regional house in Navarra the Banda Sinfónica de la Casa Regional de Valencia played some popular Valencia fiestas music for the public. Among those present was the president of the Casa Valenciana in Navarra, Salvador Tarazona, and the conductor of the brass band, Adriá Sánchez and the queen of the 2012 Fallas, Eva Ruiz.

The fiesta event, at which the Amstel brewery served free beer to the public, finally came to a close with a loud cascade of fireworks and with the burning of the ninot. A loud round of applause from the
public brought the event to an end. 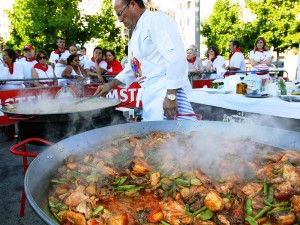 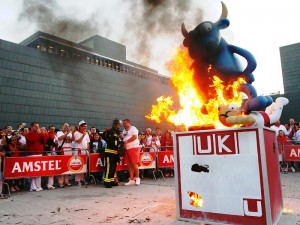 Photos from the 8th of July