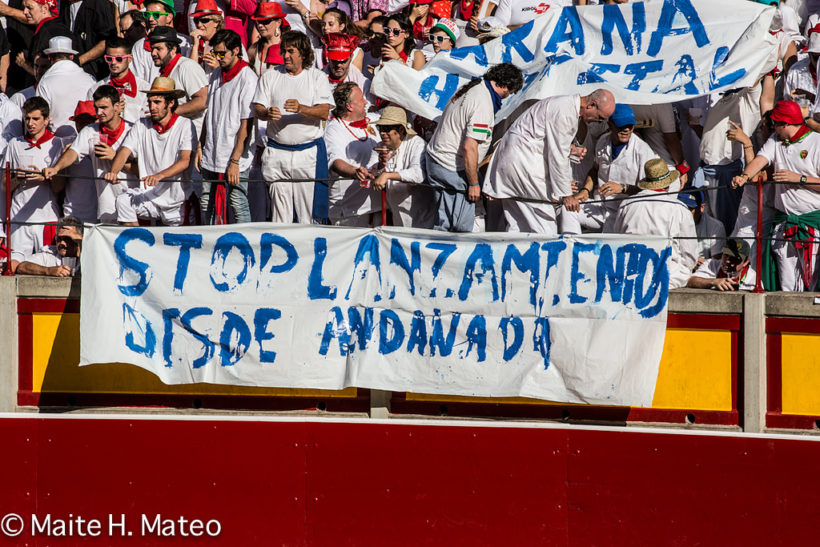 The sixth afternoon of bullfighting of Sanfermin 2015 began well, with the first bull from the Conde de la Maza bull-ranch.  Eugenio de Mora read his options well and in the end, was awarded an ear for his work. This proved to be the only one of the afternoon that the large attendance – about 20,000 – was to see. Although it has to be said that quite a few spectators on the sunny side were not in a condition to see very much in any case.

The toreador from Toledo could not complete his triumph because the rest of the bulls were not up to much – perhaps with the exception of the sixth and final bull, which Juan del Álamo might have done more with. He only achieved some light applause in an afternoon when the bulls showed themselves to be just a pile of increasing dangers, heightened by some defending that was nothing less than deplorable and which made it impossible to find any trace of bullfighting qualities in their work. Antonio Nazaré was completely lost among such animals and he was left empty-handed, in a clamorous silence. Bulls that were more like elephants.

In the stands, there was a banner requesting that no objects be thrown from the upper stands. Yesterday, the La Jarana Peña club denounced the action when a spectator threw ice down to the lower stand which hit a spectator on the head and which required hospital treatment. Indeed, one of the Sanfermin.com staff had a similar experience, when a glass was thrown which hit her on the head. Something will have to be done. Before it is too late.