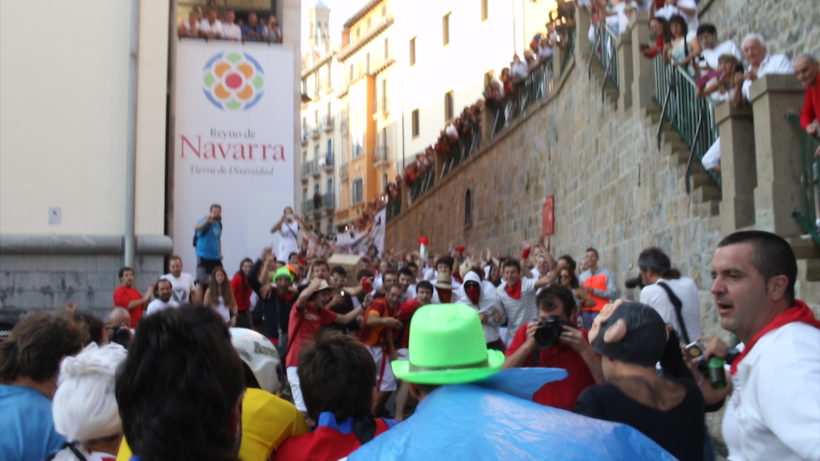 More than five hundred people gathered early this morning at 8.00 a.m. to take part in the “bus- running” (as distinct from the bull-running) and better known as Encierro del Dïa 15 o encierro de la villavesa. Organized each year by some people from the self-proclaimed movement, Movimiento 15 de julio, This is a vindication event to state that the fiestas don’t finish just when the authorities say that they do, but when the people themselves decide it is time to finish. As always the procession began after the Pobre de Mí traditional closing event and soon Mono Charlie, Induráin and a fake dressed-up San Fermín (but with many adept followers) could be seen in the streets of Pamplona.

Just a quarter of an hour before the clock struck 8.00, the main protagonists appeared, coming down from Jarauta Street with the traditional “Spada” bike and the entourage of “city hall” figures. There was a young man dressed as a banana, another as Tom Sawyer, a man with a black plastic garbage bag over him, another with a publicity poster of Media Martk and several “policemen” in various stages of uniform dress.  They made their way through the large crowd of 500 people or so, waiting in Santo Domingo – certainly more than double the attendance of the past few years. The banner of the Peña Anaitasuna also made its customary appearance.

The whole event took 12 min. 15 sec. From the start at Santo Domingo to the finish at the bullring. It might be said that the event proceeded in its usual mayhem way. One participant was to be seen walking over a parked car which he apparently failed to notice in Estafeta and San Fermín was seen to trip up and fall at Mercaderes and he was promptly stepped on by some of the crowd. Although the crowd soon made the proper and appropriate reverential bows to him. Someone tried to touch Induráin on his bike “spada” and only succeeded in knocking off his cute aerodynamic helmet.

The homilies paid to Induráin and to San Fermín were massive, but, as has happened in previous editions, Induráin came to a halt until two, who had shouted in Estafeta “UPN Kanpora” did the same for him.

The “running” event came to a close at the entrance leading into the bullring with a spectacular riau-riau after which everyone made their own way home or to wherever, as best they could.