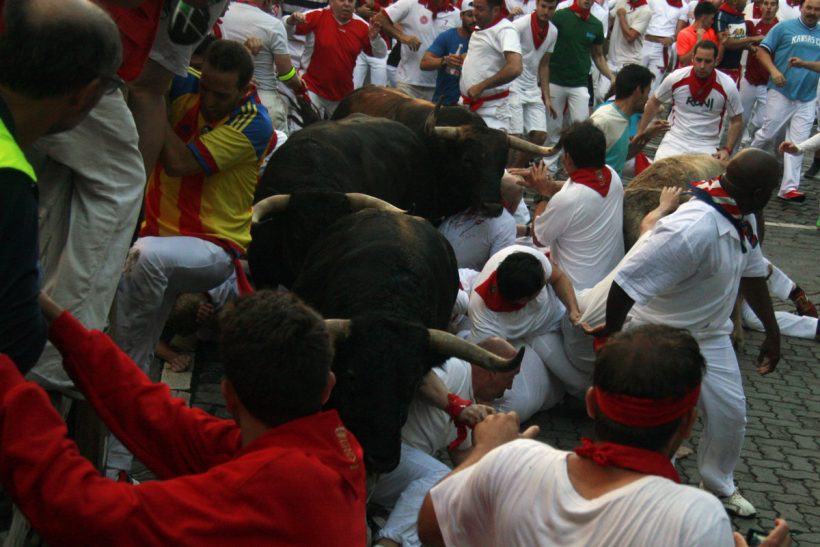 The Sanfermin 2016 Running of the Bulls did not especially stand out for their dramatic moments, nor were they especially spectacular to watch. Nevertheless, the hard facts have their own story to tell: the figure of 52 injured runners for severe contusion and bruising equals the record set in 1993 and the 12 gorings, alongside the years of 2001 and 2002, make up the second highest number of gorings ever since records have been kept on the Running of the Bulls in San Fermín fiestas. The average figure for the duration of the runnings works out as the sixth fastest ones, in front of the 2 min. and 56 sec. of 2004 and behind the 2 min. 46 sec. of 2011.

For most people, even before the Sanfermin fiestas began, it was a sure bet that the bulls from the Cebada Gago bull-ranch would be the most dangerous in terms of gorings and so it was. They left 7 runners injured from gorings, and that day turns out to be the second Running of the Bulls ever with the highest number of gorings, just behind the 8 that were meted out by the Jandilla bull-breed in 2004. The Running of the Bulls with the Cebada Gago was an awesome morning where there was bedlam and  mayhem as three of the bulls were separated and running alone, creating a chaotic scene where even one of them ran more than 300 meters in the opposite direction before finally being lead up into the bull ring.

In addition, the José Escolar bull-ranch now finds itself in third place for the highest number of contusions and bruising ever in one Running of the Bulls. 12 runners needed medical treatment for different kinds of severe contusion that morning. There was also a bizarre scene that day of a bull turning back on the first stretch when it was half way up the slope of Santo Domingo. This was a key factor in contributing to the fact the Runnings of the Bulls this year equaled the record for this kind of injury.

Finally, the Jandilla the bull-ranch proved to be the cleanest of all the bull-breeds in this year’s fiestas. Just 3 runners needed treatment for bruising.  Although it has to be said that one runner had a miraculous escape from getting a serious goring to his neck in the final stretch that same morning. And that would have painted a different picture if the goring had materialized.

Currently three wounded continues in the hospital, one from Navarra and two fron Valencia.