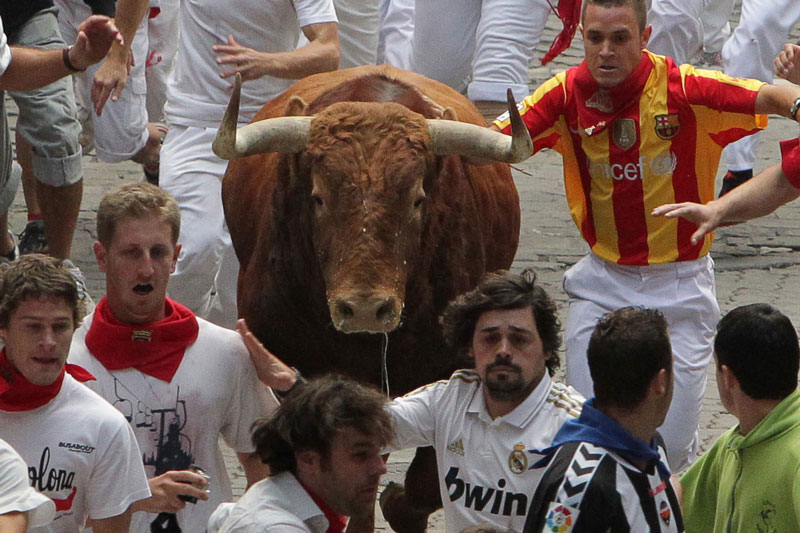 In spite of the frenzied pace set by the bulls in all of the running of the bulls this year, the runnings proved to be clean and the bulls well-behaved. The medical report evaluation can be summarized in just four runners injured from the horns of the bulls while another thirty four runners were removed to the Navarra hospitals for treatment for various degrees of heavy bruising and traumatisms.

The moments of greatest danger occurred on the 7th and on the 9th of July, which was when the Dolores Aguirre bull-ranch and the Cebada Gago bull ranch ran respectively. They caused the only four gorings which took place in this year’s Sanfermin Running of the Bulls (one on the 7th and another three on the 9th), which was in total one less than in 2011. In addition to these four gorings, a total of 34 other runners were taken to hospital suffering from contusion and traumatisms. This number was four less than for the same period during Sanfermin fiestas last year.

The speed of the bulls was hectic and only two of the runnings lasted longer than three minutes; on the 9th with the Cebada Gago bulls and on the 11th with the Fuente Ymbro. The fastest running this year was made by the Victoriano del Río bulls on the 12th of July, when they covered the whole course in just 2min. 20sec, which was just 9 seconds short of the record-holding fastest running made by the El Pilar bulls in 2011 . It was not easy for the runners to find space and time in front of the horns of the bulls, nevertheless, some spectacular running could be appreciated during each day of the runnings, particularly in the Estafeta Street stretch where the bulls tended to separate from each other and more room could be found by the runners.

Here are day-to-day summaries of each of the runnings, including all the best photos and a daily injury report: