Catherine Donnell, a 52 year old North-American was born in Santa Fé (New México-USA). In Paris, this past weekend she was awarded the trophy of IX Guiri del Año de Sanfermin 2012 by Koldo Aiestaran, one of the founder-members of Kukuxumusu, in recognition of her unremitting visits to Sanfermin. This award has been handed out each year ever since 2004 by the Pamplona firm in recognition of the contribution made by the foreigners who come to Sanfermin fiestas and who held to make Sanfermin what it is.

Catherine Donnell will this year, in 1212, celebrate thirty consecutive visits to Sanfermin ever since she first arrived way back in the early ‘80s by car from Paris and accompanied by three other friends in order to enjoy the Sanfermin fiestas. “We arrived in the early hours of the morning in Pamplona and our idea was to get some sleep before the morning Running of the Bulls after our long drive from Paris. We soon found ourselves in the old quarter of the city and we were immediately caught up in the partying when we met up with two brass bands and we had a great time right through to the morning Running of the Bulls. Then we went off to sleep under our car. It was pretty grubby, but well worth the experience, and I would certainly do it all again”, states Donnell.

Mister Testis – the Kukuxumusu blue bull – and Koldo Aiestaran were able to get to know Paris, where Donnell has been residing for many years now. They also met up with some of her friends and family. She will soon be back in Pamplona once again and ready to immerse herself in the greatest fiestas in the world but this time as Guiri de Año. She proved a good host in Paris and accompanied the Kukuxumusu party to many of the most emblematic sights of Paris. They discovered many little squares in the oldest quarter of the city as well as the Daniel Buren installation, the Les Deux Plateaux, the gardens of the Palais Royal and the Louvre Museum. In addition, they celebrated the handing over of the award with friends and family of Catherine at the Petit Fer a Cheval, in the quarter of St Paul le Marais. The particular little fiesta came to a close with the opening of a home-made bottle of Patxaran liquor and the playing of some typical Sanfermin music at the home of Catherine Donnell, where she has set up a kind of mini-bar around the theme of Sanfermin fiestas.
Mister Testis turned out to be a pleasant surprise for the pedestrians in Paris as they saw the blue bull cycling past and some of them even received a friendly charge or two from our fluffy blue bull. They antics of Mr. Testis reminded Catherine Donnell of what most impressed her when she first visited the fiesta of Sanfermin thirty years ago: “It was the overwhelming atmosphere that most surprised me. Everyone was so open and friendly and the crowd just pull you into the partying and won’t allow you just to stand passively and stare.”

On the 9th of July, at 13.00 p.m. the Guiri del Año 2012 award will be handed over in Pamplona right in the middle of the Sanfermin fiestas, outside the Europa restaurant and then all the previous winners of this award will be invited to join Catherine Donnell in a celebratory meal in homage to the foreigners and which Kukuxumusu organizes annually. Catherine Donnell succeeds another North-American, John Hemingway, in receiving the award. This grandson of Ernest Hemingway was declared Guiri Del Año 2011.

The award “Guiri del Año” was first created by Kukuxumusu in 2004 to acknowledge the important contribution that the foreigners make each year to the fiestas of Sanfermin. The winners down the years come in the following order: the Puerto Rican, Carmen Margarita Alicea (2004), the North-American Lore Monnig (2005), the Swede, Lars Ingvar Jungefors (2006), the German, Manfred Walloschke (2007), The Moroccan, Massaoud Sbai el Idrissi (2007), the Englishman, Frank Taylor (2009), the Japanese, Chiyoshi Sugawara (2010) and the North-American, John Patrick Hemingway (2011). As well as this annual award, ever since 1997 Kukuxumusu has been organizing an annual day during Sanfermin – the so-called “Guiri Day”- where homage is paid to all those foreign visitors who come to the Sanfermin fiestas. 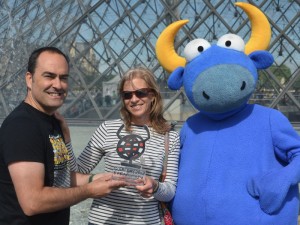 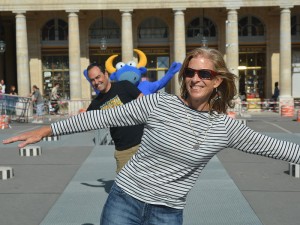