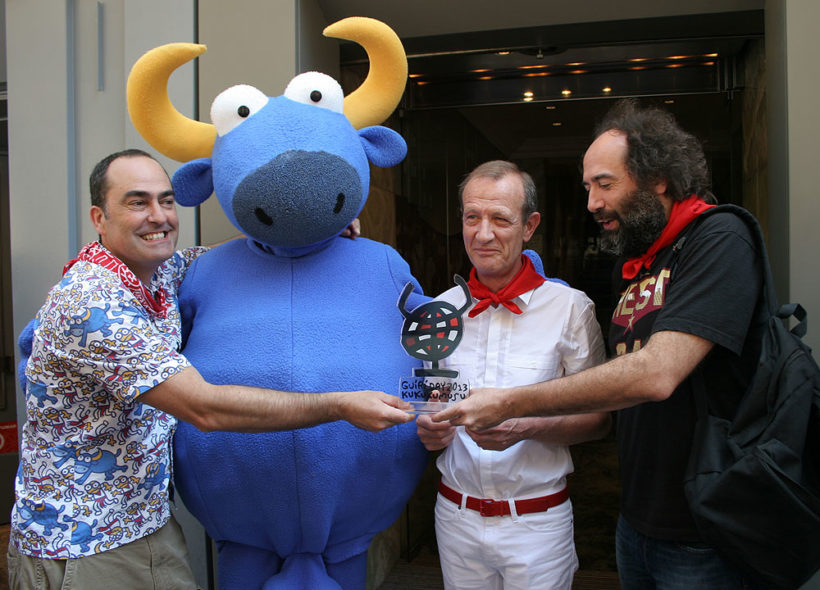 The Frenchman, Jean-Louis Douenne, was today given the X Guiri de Sanfermin Award, which is annually bestowed by Kukuxumusu to some long-standing foreign visitor or other who comes to Sanfermin. The firm aims in this way to give recognition to the contribution of the visitors to the fiestas which they live with a passion and intensity every bit as strong as the local people do.

The bestowal of the award took place at the Europa restaurant on the same day as the celebration of Guiri Day, the day which has been organized by Kukuxumusu for the past sixteen years to pay homage to all the foreign visitors to Sanfermin.

Jean-Louis Douenne was handed over the award by Mikel Urmeneta, Koldo Aiestaran and Gonzalo Domínguez de Bidaurreta, the three founder-members of Kukuxumusu. Of course, the popular blue bull, Mister Testis, did not fail to attend the event and there were also a good number of the previous winners from earlier years among the gathering. 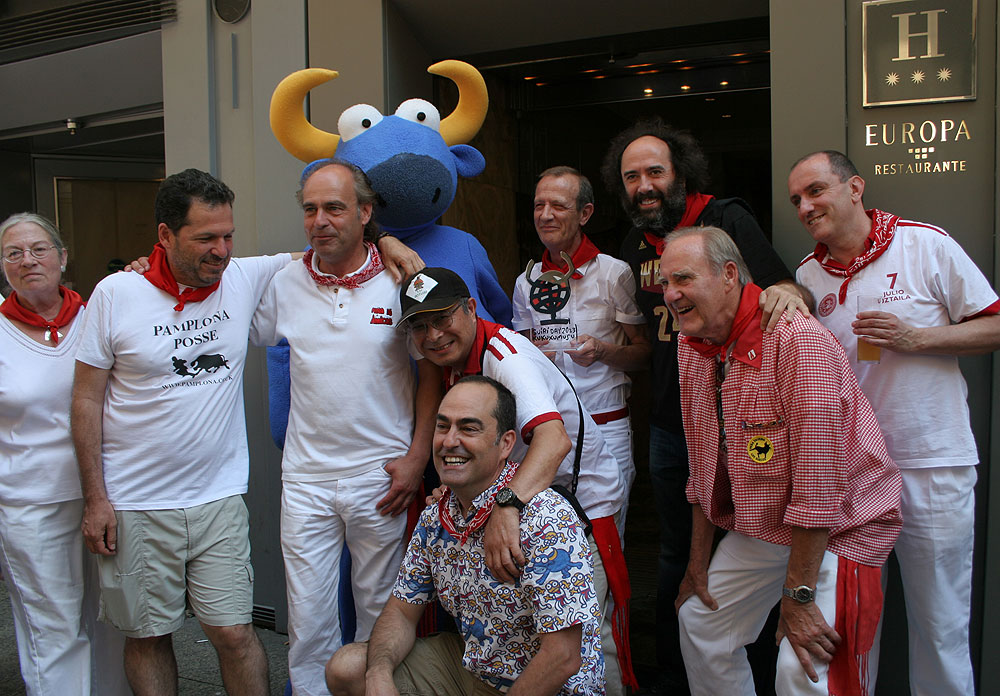 The award-winner was very pleased to accept the accolade. “This year I feel more foreigner than ever but normally I am never made to feel different to anyone else during the fiestas and I am just another one of the crowd. This city has never made me feel like a foreigner but rather has always accepted me as just one more of them, fully integrated from the beginning. This award has given me a sense of great satisfaction”.

Jean-Louise Douenne was born in 1950 in the French town of Cherbourg (Normandy) and he has been coming consistently each year to Sanfermin without interruption since 1999. What he likes most about the fiestas is “the street party scene, the magic of the running of the bulls, the bullfights, the amount of drinking that can be done in a short period of time and the spectacle of the sleeping revelers getting hosed down by the early morning street cleaners”.

Douenne is an eye specialist and he manages some of the Luz Clinic clinics in Biarritz and Pamplona. His annual holidays are shared between Sanfermin and his philanthropic work for the NGO, Africa Luz. After the end of fiestas on the 15th of July, he will travel to Africa to operate on eye cataracts for people who cannot afford to pay for this operation. “Ever since I first began to realize that there was so much inequality in the access to health and to energy, I have felt it was my duty to help out those who share our existence on this earth”.

After the bestowal of the award, the gathering enjoyed some drinks and cocktails at the Europa restaurant before heading off to a nearby country house, where they shared a full meal with a good part of the staff from Kukuxumusu.

Among those present there were several former winners of the award such as the North-Americans, Lore Monnig (2005), John Hemingway (2011) and Catherine Donnell (2012), the Swede, Lars Ingvar Jungefors (2006), the German Manfred Walloschke (2007), the Englishman, Frank Taylor (2009) and the Japanese, Chiyoshi Sugawara (2010). Only Carmen Margarita Alicea from Puerto Rico (2004) and the Moroccan, Massaoud Sbai el Idrissi (2008) were missing.