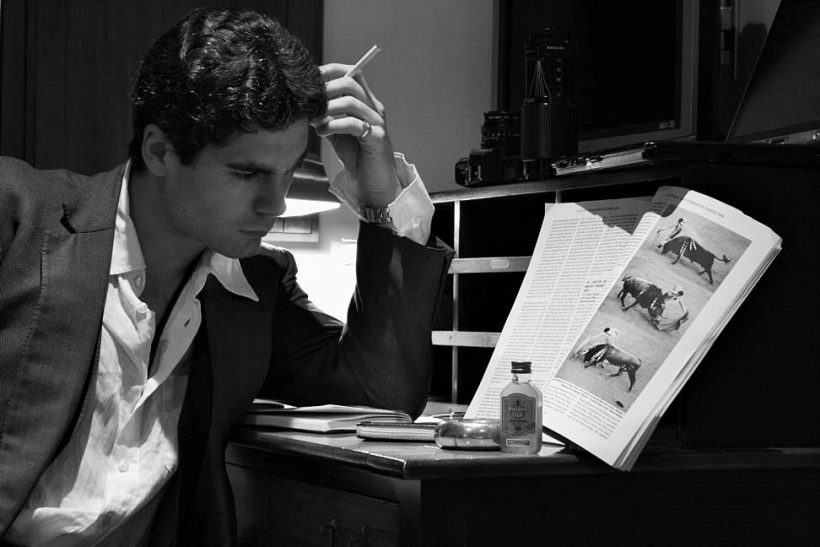 Update 29th Nov.
“Unfortunately, Alexander Fiske – Harrison did not win the coveted William Hill Sports Book of the Year 2011. But to be selected for the shortlist of the worlds most prestigeous sports book prize is the equivalent of being nominated for an Oskar, and is one hell of an achievment.”

Prescript: Just to let anyone know out there who cares, I had never met the writer of this book when first I read it. I had read a brief part of it in Graeme Galloways “No Bullshit” Pamplona fanzine of this year, and it was enough to persuade me to buy the book. (No mean feat…anyone who has read some of the stuff in “No Bullshit” will know that the quality is up there with the behaviour of some of the French in fiesta -merde- and I should know…I’ve written some bullshit for No Bullshit!). Sorry Graeme, I’ll try and do better next time…

But the small section that I read intrigued me, and because every year, post fiesta, I always buy a book about Spain as part of my rest and relaxation “come down” from the post Pamplona alcohol induced San Fermin fiesta fuelled hallucinations that I experience every year, I resolved that when, and if, I made it home, then this book would be the one I’d buy. And it was, and I did. So here’s the review.

“INTO THE ARENA” by ALEXANDER FISKE-HARRISON

Last news: ‘Into The Arena’ shortlisted for the William Hill Sports Book Prize

You can see a preview or buy the book in Amazon

This is an extraordinary book. It is about so much more than either I thought it was going to be about, or the blurb on the back cover says it’s about. There is a quote on the front of the book, “A hero from another age, a fearless Englishman touched by madness. His endeavour owes as much to Captain Oates as to Hemingway, as much to Flashman as to Don Quixote”. Or, put it this way, from the title of a song from the band, Kinky Friedman and the Texas Jewboys, “They don’t make Jews like Jesus anymore”. Well, they don’t make too many Englishmen like Alexander Fiske-Harrison any more, either.

To put it very, very simply, it’s a book about bullfighting, written by an Englishman. Although that’s rather like saying “Lord of the Rings” is about a bunch of dwarves looking for a ring. Because, of course, the story about the Hobbits invents a whole new world, and AFHs’ book goes into what for most of us is a whole new world… that of the bullfighters, their teams, the ranch owners, their friends, their families, the hangers on… I thought I knew a little about the world of bullfighting, and I do, but this book took me to a different planet.

And for those of you who love Spain, whatever your opinion about bullfighting, this book is a superb travelogue that transports you to the very core of that amazing, passionate country. And for centuries, one of the main things Spain has been defined by, of course, is bullfighting, and Fiske-Harrison manages to get to the very blood pumping and bull running, (because the Spanish word for bullfight, corrida, comes from “correr”, to run), heart of that beautiful country. The bullfight.

From the very first page, when you read the surgeons chilling description of a bullfighter (Manolo Montoliu), who was killed in the ring in Seville in 1992, “his heart was opened up like a book”, I was hooked, and throughout its 300 pages the prose never failed to thrill me, or chill me, or make me smile, laugh, cry or choke up. Fiske-Harrison manages to open up the closed world of bullfighting, yes, like a book, and it’s a fascinating ride.

By the end of it, and I must admit I never quite saw how it would end, I still didn’t know if he was for or against bullfighting, or was he a neutral? Having read it again, I’ve come to the conclusion he is neither for or against it, or maybe he is for and against it. I think! I’m confused… William Skakespeare, through the lips of Hamlet, would understand… Oh, and by the way, AFH used to be a member of both the World Wildlife Fund, and Greenpeace, so he is no bloodlusting, cruel animal sports fanatic or anything like that.

The book came about after an article he had written for a magazine called “Prospect”, which, as he says, went worldwide, “from Al Jazeera to the Dayton Daily News”. That led him to phoning a friend in Spain, who invited him to see a bullfight in Madrid. The very next day he was on a flight to Spain, and the seeds of this book were planted. It was October 2008.

He has a fascinating use of language, and a way of writing that describes exactly what you think you have just read and understood, (and you have), but then uses something else to reiterate the point. For example, he equates a bull “fighting” and what’s going on in it’s head at the time, to seeing one time at his home in England a hawk plummeting to the ground with a pheasant in it’s claws. It’s owner, the falconer, came over and gently removed the pheasant from the hawk, and slipped into its place a half eaten pigeon. The hawk, as you might say, didn’t miss a beat, or indeed a bite, and carried on eating. The point is, to quote from the book, “for the raptor, there is merely the idea of [prey], indivisible and pure. For the bull, likewise, there is the perceived threat at that moment and nothing else”.

For the bullfight aficionados the descriptions of the bullfights are what might be described as “painting a canvas”, i.e: you can see it, as if watching it on television, he writes about it that well. Now, talking about bullfight fans, especially the “foreign” ones, (by that I mean, generally speaking, the non Spanish or South American ones), there is no doubt some jealousy regarding the book and AFH himself. How dare a complete unknown waltz into the world of toreros and corridas and write a book about it less than 3 years later… well, let me just say to those aficionados… Fiske-Harrison has gone into the arena, put his feet on the sand and faced some of these animals. And as someone who has never done that (but has run with, and mostly away from, the bulls in Pamplona), that takes guts.

As he writes in the book, “the number of times I have been interrogated, patronised and downright insulted by Englishmen who have [devoted their lives to bulls], I reckon goes into double figures. The number of times this has been done to me by a Spanish bullfighter, breeder or aficionado is much easier to estimate. Zero”.

Zero…remember, AFH came from almost nowhere, and entered, as a foreigner, into what is still a pretty much closed world for them, and gained not just the friendship of some of the most famous bullfighters and bull breeders on the planet…but also earned their respect. Think about that for a minute…he earned their respect. That is a hell of an accomplishment.

At one point he is talking to the bullfighter Cayetano, just 2 years qualified, who looks over the ring and says to him:

AFH thinks he is looking at the Spanish flag, fluttering in the wind, and thinks he hates the flag of his country.

“No, the wind that makes it fly. The wind, that is what kills you”. (When the wind lifts the toreros cape, it can change the direction of the bull, and can be incredibly dangerous for a bullfighter). As he writes, “And this from a man whose father died in the ring”.

As mentioned earlier, this book is not just about bullfighting. It’s a wonderful travelogue through parts of Spain, that reminded me a little of what is probably one of my favourite books, “The Dangerous Summer” by Ernest Hemingway. And I mean “one of my favourite books”, period, as I am not a big fan of Hemingway, but I love Dangerous Summer because of the descriptions of travelling around Spain in the 1950’s. Well, this book also travels around Spain, a country that I love, but it also has history in it, as it is a superbly researched, historically fascinating read, but is also full of humour, and tears and laughter, and partying and Pamplona…and, literally, life and death.

There are heartbreaking moments in it too, not just of the bulls and their deaths (they are more or less brothers, after all), or of bullfighters, but of brotherly love also, not just amongst family, but amongst those in the taurine world who rsk their lives in the ring. Sometimes, completely unexpectedly, I read something that brought tears to my eyes. He has a way of giving you an “emotional punch”, if I can put it that way, but you never see it coming. Thanks to him, I finally understand what the word “never” can really mean. (You need to read the book).

For those of you who are just bull running fans, or are just hooked on the whole Fiesta of San Fermin thing, then that extraordinary town appears in the book too. I shant say too much about the Pamplona part, so as not to spoil your enjoyment and it’s only a small part of the book anyway, but there is a lovely, “put down” said to an English officer of the British Army, when AFH tells him briefly what he is up to. I have also used something similar a couple of times in the past, or just shown someone a couple of photos from my bull running days.

Also, any book which has this in it must be worth a look. It is from the wife of someone called Adolfo, a very good amateur bullfighter who occasionally appears on the main card with the professionals. The lady in question, Belen, asks Fiske-Harrison, “But why does an Englishman want to write about bullfighting? This is not what the English are interested in. They are polite and weak and rich and mainly homosexuals. Obviously not you, Alejandro…”

If I ever meet her, I hope I have one of my (very few, admittedly), bull running photos with me…

And thanks for the description of us English, Belen, as most people think we are just a bunch of fat, balding, foul mouthed, kebab eating, binge drinking, fightng, vomiting yobs. And that’s just the women…

I could go on and on, and I’m sure some of you think I have gone on enough already, but may I just say this: this is a beautiful, wonderfully written and hugely entertaining book, that is about so much more than just bullfighting. It’s about life, and death, by someone who knows, and I’d recommend it to anyone.

When I first read “Into the Arena”, I had never met Alexander Fiske-Harrison, but I knew of him, as the band of “international drunks” as Hemingway called them, the Pamplona crowd, is, although not small, connected by that one thing: San Fermin.

But since them I have met him, at a pub in London. I didn’t exactly expect him to arrive in an ambulance and be escorted out in a strait jacket, but I thought I might detect something, a streak of madness, a twitch…but no, he was just (or at least, appears to be!), an ordinary man, although an obviously talented one, who has written an extraordinary book. We had a couple of pints and talked a lot of bull, you might say, and he was, if I can steal something he inscribed to me in my copy of his book, “a man well met”.