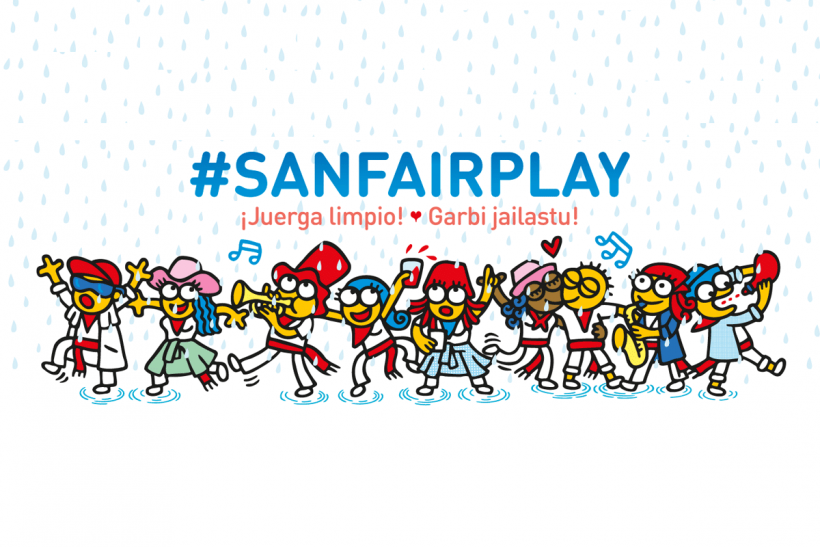 The SanFairPlay concept is based on the Fair-Play code that is found in sports games  and the “clean-play” call that was launched by FIFA in the 1990s and which is acknowledged all over the world. Kukuxumusu has given its own twist to the slogan with some word- play and come up with the “SanFairPlay “concept. A universal slogan in support of one of the best-known fiestas in the world to help keep these fiestas the most popular and integrating in the whole wide world.

To reinforce this concept of SanFairPlay, the Factory of Ideas and Drawings have created a joint Basque-Spanish slogan “Juerga Limpio/Garbi Jailastu”, (Clean Partying) in reference to the fact that the partying should not violate the rights of anyone.

Following up on the sports simile, Kukuxumusu has outlined some short and clear ‘rules’ with seven points to be followed by all those who attend the Sanfermin fiestas. Using their characteristic direct and straightforward tone, Kukuxumusu asks for complete tolerance for gender differences, for race, for sexual orientation. It demands zero tolerance for any kind of aggression, a civic sense of responsibility in public places and collaboration with all those bodies that are there to ensure that the fiestas take place as they should.

These ‘rules’ have been listed on Sanfermin.com web page (the most-visited web page on the Pamplona fiestas throughout the year, with an average of 600.000 visits) and it has also been printed on paper in four languages (Spanish, Basque, English and French). The SanFairPlay message will be spread across the social networks on Facebook, Twitter and Instagram, with the aim of reaching the largest number of people possible.

In addition, Kukuxumusu will send out a special singular ‘pack’ to some people who are closely connected or associated with the Fiesta to reinforce the objective of SanFairPlay: It will contain a bar of Chimbo, soap – the typical soap that is in everyday use – along with a hand-out that lists the rules of “clean play” in four languages and wrapped up in a special box that will communicate in a humorous way the main points of SanFairPlay.

Without a doubt, one of the most visited ‘spots’ during the fiestas is the Countdown Clock at the Kukuxumusu store at the top of Estafeta Street. This is also part of the stretch of The Running of the Bulls, just a few meters from the final stretch leading into the bullring. And here too, the message of SanFairPlay will be displayed in four languages (Spanish, Basque, English and French).

And finally, the image and the slogan of SanFairPlay have been put on some stickers which will be handed out during the fiesta days to Kukuxumusu customers and indeed to anyone who wishes to receive these free stickers.  The aim is to ensure that the call for tolerance is seen and heard by as many people as possible in the hope that this will ensure the most universal fiestas in the world can continue to be open and respectful of all, and to be clean and integrating fiestas for everyone.