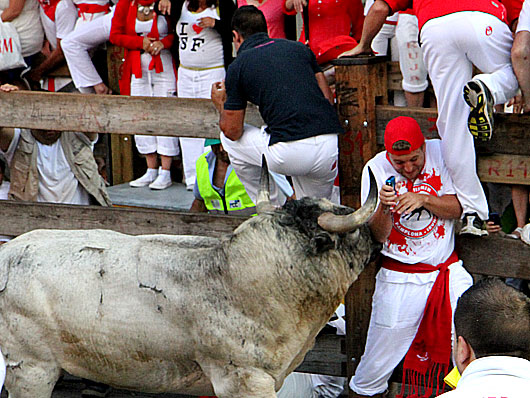 Esquire Network has just announced today some of their forthcoming projects for 2015 and once again they plan to broadcast the Running of the Bulls live next July. Matt Hanna, Head of Original Programs at Esquire Network, made the announcement today and he justifies his new programming for 2015 thanks to the success achieved with audience figures which increased by some 21% from the previous year. Above all, there was a big increase in their male audience of men between the ages of 18 and 40 years.

The Running of the Bulls was defined at the presentation of the new programming as the best-known cultural icon of the whole world and he stressed that the broadcasting of the event would be live. As well as the live 2014 broadcasts, he also underlined the role of John Hemingway, grandson of Ernest Hemingway in the success of the event. John was, of course, Kukuxumusu guiri del año when he was given their foreigner-of-the-year award in 2013.