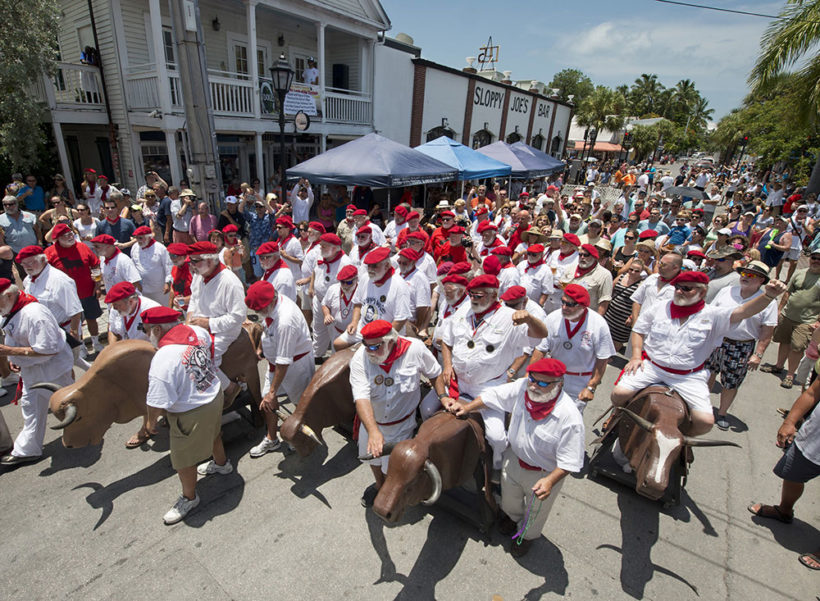 These days they are celebrating in Key West what would have been the birthday of Hemingway (21st of July, 1899). If he were still alive he would probably be just getting over a tough Sanfermin hangover or he would be in this edition number 34 of the Hemingway Days – a party they hold in his honor there every year on these dates.

The Hemingway Days are celebrated each year in the bar Sloppy Joe´s in Key West, which used to be frequented by Ernest Hemingway during the long period that he spent living in Key West. This image comes from the typical collection of “lookalike” Hemingways who dress up in Sanfermin gear and who take part in a “bullrunning” and in a quiz show in a competition to find the person who does the best caricature of Ernest Hemingway. All the finalists earn the right to be called “Papa” at Sloppy Joe’s Bar.

Images from the Tourism Office in Key West.

The 2014 “Papa” Hemingway is Wally Collins, the man who stands up the “Look – Alike” award.

Just to show how important this event is in Florida, a lawyer  who was representing a man charged with a plot to commit murder requested an adjournment of the court case so as to be able to participate in the Hemingway Days.

The judge in charge of the court case refused to grant the adjournment because “having the option of going to a murder court case and a lookalike competition , for sure Hemingway would have chosen the court case“. However, he wished the lawyer good luck in the lookalike competition if he entered the competition in the future, and  Frank Louderback, the defence lawyer,  accepted the decision of the judge and pointed out that at least in the way, “he was getting another year in which to get a bit older, a bit fatter and a bit more gray in the head”.