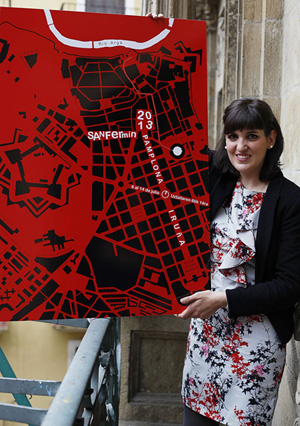 Elixabete Bornada, a 30-year-old architect from Pamplona, is the author of the poster that will announce the 2013 Sanfermin fiestas, after receiving the highest number of votes from the citizens of Pamplona who cast (36% votes-1780 for the winner) a total figure of 4.964 votes for the finalists. She is the first woman to win this annual competition and, as she herself has stated, she wished to pay homage to the city itself in her creation. The original idea arose from her work as an architect two years ago and matured until finally taking the shape that can now be seen on the poster.

Here you can view the historic gallery of Sanfermin posters.