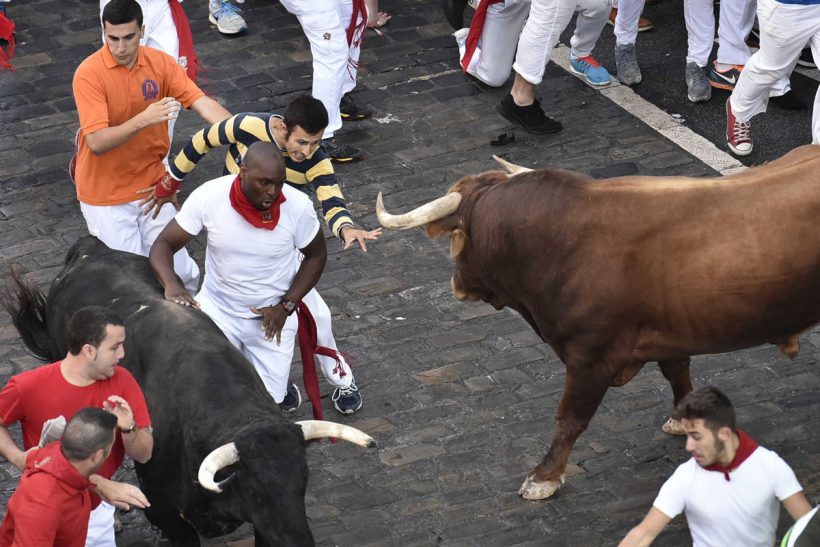 Bulls that were loose and separated, bulls that were falling down and running in opposite directions, bulls that were charging at runners all along the course. Runners who could not control the count of the loose bulls and who did not know from what side the bulls were coming from and if some had already passed by or not. Runners who suffered a goring on practically each stretch of the course. In short, a running of the bulls that will be long remembered for the crazy and weird turnabouts of many moments of this morning’s run.

Things quickly started going amiss even on the opening stretch of Santo Domingo, where a veteran local runner received a goring to his leg. As the bulls sped past the City Hall square, some spectators seemed to call to the charging animals to take things easy; almost foreseeing and sensing that worse was to come.

And soon, there came total chaos as the bulls separated from one another and started charging at runners, causing some gorings and general mayhem as a couple of the bulls turned back and ran in the opposite direction. Besides the gorings, several runners received injuries to arms and legs. If some runners had started off the event today, believing that the Running of the Bulls was child’s play and a harmless kind of event, they soon learned their lesson and indeed learned just how dangerous and frightening the event can be. But it takes all kinds and today there were all kinds of things to see and to be seen.