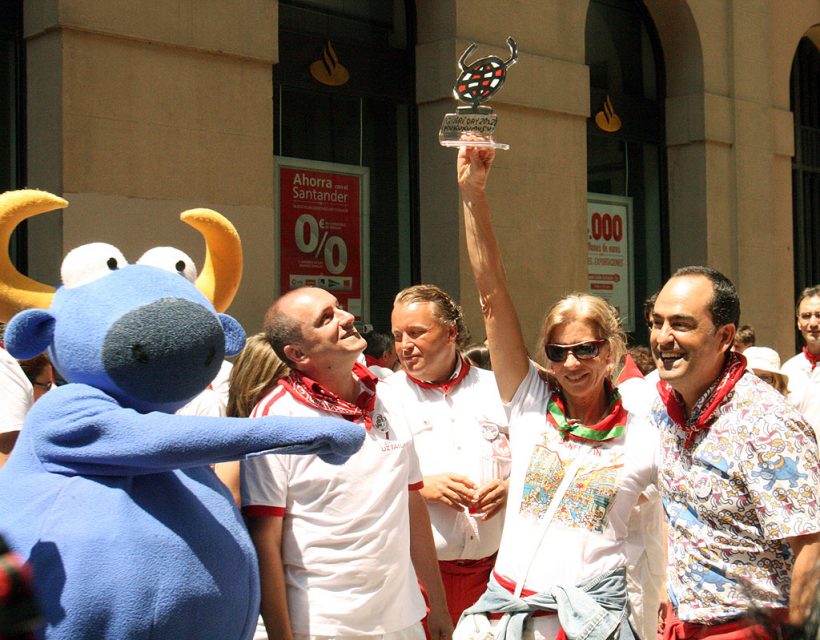 The North-American who resides in Paris, Catherine Donnell today received the IX Premio Guiri Del Año Award which is handed out each year by Kukuxumusu in recognition of the role that foreigners who live the fiestas with passion and intensity add to the Sanfermin fiestas. The award was handed over at the Europa restaurant coinciding with the celebration of Guiri Day. This special day has been organized by Kukuxumusu for the past 15 years in order to pay homage to all the foreigners who visit Sanfermin.

Catherine Donnell received the award from Koldo Aiestaran, a founder-member of Kukuxumusu, and who was accompanied by the blue bull, Mister Testis. An ample group of foreigners who are regular visitors to Sanfermin fiestas year after year were also on hand. In attendance also were most of the previous winners of this award. The winner was touched by the reception she was given and she expressed in her gratitude: I feel quite overwhelmed and surprised at the impact that this award generates, but I am also very grateful to Kukuxumusu because, although I have been coming here for Sanfermin, and I no longer feel a “foreigner”, I am very pleased to be given this award and recognition.”

For his part, Koldo Aiestaran underlined the fact that” although Catherine does not live in Pamplona, she has been coming here constantly over the past thirty years and her relationship with our fiestas and our people from here are more than sufficent justifications for awarding her with our Guiri Del Año award.”

As well as the award received from Kukuxumusu, the New Yorker, Lore Monnig, president of The New York Taurino Club, has also wished to pay her particular homage to Catherine Donnell and she formally dressed her with the insignia scarf of The New York Taurino Club as well as giving her a miniature version of the Wall street bull. Both of them jokingly accepted that this Wall street bull was a symbol of the • crisis bull”

Catherine Donnell, a 52 year-old North-American was born in Santa Fé (New México-USA), this year celebrates her thirtieth consecutive visit to Sanfermin ever since she first came back in the ‘80s, accompanied by three friends who also travelled by car from Paris to learn about the fiesta. Since then she has never missed her annual date with Pamplona and the Sanfermin fiestas.

After the award was handed over, the attendance was served with some drinks and snacks in the Europa restaurant and afterwards, everyone was taken to a garden party at located near the center of Pamplona. A large paella was served here in the open-air to all the guests and a large representation of staff from Kukuxumusu.

Among those present were some of the previous winners from earlier years such as the North-American Lore Monnig (2005), the German Manfred Walloschke (2007), The Moroccan, Massaoud Sbai el Idrissi (2008), the Englishman, Frank Taylor (2009) and the Japanese, Chiyoshi Sugawara (2010). Just three of the previous winners failed to make the ceremony this year and these were the Puerto Rican, Carmen Margarita Alicea (2004), the Swede, Lars Ingvar Jungefors (2006) and the North-American, John Hemingway (2011).

Nor could the creator of the award, Mikel Urmeneta, and a founder-member of Kukuxumusu make it this year, due to professional commitments. However, he left a written message for all those who attended the event.

More photos from the 9th of July