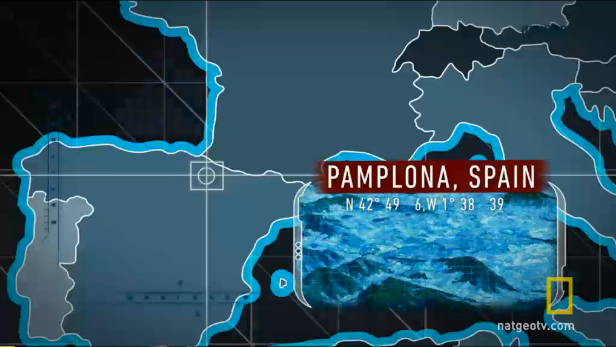 This evening at 22.30, National Geographic kicks off with a new program called Do or Die“and which contains a video on the Sanfermin Running of the Bulls. The program was broadcast last year in the USA under the same title “Do or Die” . It can be seen on Canal + I here in Spain and later on other cable TV outlets. The theme of the program is what action should best be taken when under moments of extreme danger. Sanfermin.com conceded some material used in this program with some spectacular shots of the Mercaderes corner which can be seen at our channel on YouTube. This is an extract from the original report.

Some of these same images have already been shown previously on another program broadcast on the 19th of July, 2009 in Animal Planet under the title Untamed & Uncut. In both programs an account is given by Marcus Wolf who experienced some incredible few moments in the Running of the Bulls at the corner of Mercaderes which so nearly could have cost him his life.

The theme of the program centers on how your life can totally change in just a few seconds. When you come up against some totally unexpected situation, a vital decision taken can make the difference between life or death. How should one react to a bite from a venomous snake? What to do when your vehicle brakes fail? And if you suffer a sudden tsunami?

Each episode deals with different situations of extreme danger and explains how people can react to each situation when confronted by them. Real life situations are always treated in the program and the NGC program always proposes three possible reactions so that the viewers can use their own instinct and they then evaluate the three options to find the best one for each situation. Afterwards, with the help of digital recreations, The NGC series then makes an analysis of the consequences of each decision to show what might perhaps be the only option that could allow the person to come out alive. 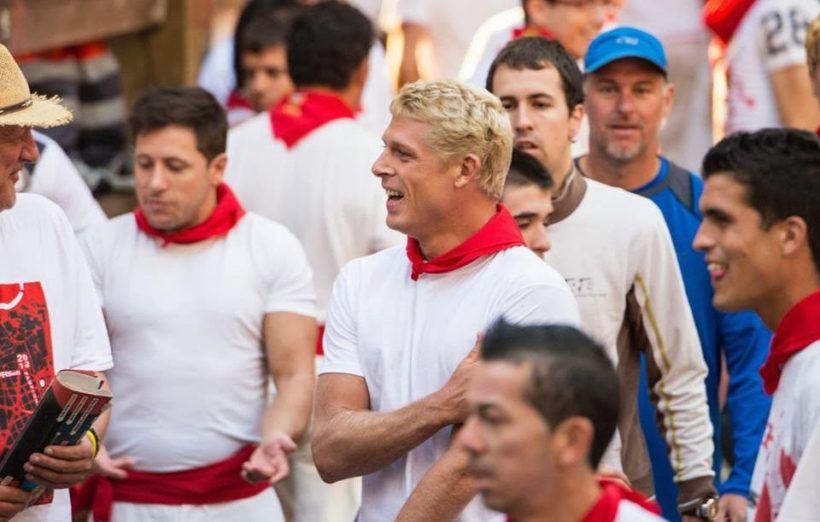 Three times world surf champion Mick Fanning was here in Pamplona for Sanfermin, 2013 and he took part in the Running of the Bulls. We can now see those images in the documentary Missing made by director Taylor Steele for Rip Curl. The video centers on a challenge made by Steele to Fanning to spend three weeks traveling with him without the surfer knowing at any time what his destination might be. The whole thing was shot on a video which later was edited to produce the final film under the title “Missing.” On the 12th of July, 2013 they turned up in Pamplona, right in the middle of fiestas and the next morning Mick took part in the running of the bulls. The bulls passed him out at the entrance to Mercaderes and he ran as far as the entrance bend leading into Estafeta Street behind the bulls. The surfer did not suffer any kind of mishap and came out of the trial with some style, but the film director was not so lucky because Taylor Steele had to be treated for a severe case of gastroenteritis at the Hospital of Navarra, which we can see in the trailer offered by Rip Curl. He lied to the doctors to get a quick discharge so as to be able to continue his travels with Mike Fanning.

Mike Fanning was recognized in the Pamplona streets by some of his compatriots as we can see in this video from Fintan Gillespie.

The documentary lasts 37 minutes and it can be watched or downloaded here.

The prestigious German team – The Team Big Monkey – have developed a game for Android Tablets and Cell Phones based on the Sanfermin Running of the Bulls with the name San Fermin Bull-Run Revenge. The most novel aspect of this platform is that the person who plays takes on the role of the bull. The aim of the game in this “mischievous” Sanfermin scenario is for the bull to get revenge. The firm itself is promoting the game by listing three main challenges: to attain the highest number of tosses possible, to reach the maximum distance possible, share the results with your friends and try to get into the latest news broadcasts. In the promotional video we can see in the images scenes of runners and bits of the fencing sent into orbit by the bulls – just the ones in the game, of course.

The game images are in HD and the sound has been created with care because it is a very typical Sanfermin sound but in computerized version of course. It is available at Google Play, for free. It occupies 9.8 megas, and requires version 2.3 and higher of Android. With the first 500 downloads it achieved a mark of 4, 9 out of 5. All results are exportable to the social networks and you can challenge your mates.

World day for the Environment will be celebrated on the 5th of June. And to create awareness of the reality of the situation in the face of the passive attitude shown by many, the crowdfunding platform Carbon Story which works on environmental projects will allow any locations found in Google Street view to be flooded on this day. From the website WorldUnderWater you can flood whatever you like and we have wished to make our contribution by using this system and flooding the three Sanfermin locations which might attract the most attention, City Hall Square, Mercaderes Corner and the Bullring.

Kukuxumusu anticipated this idea with one of its famous screensavers from some years back which was entitled Underwater and which you can download here. 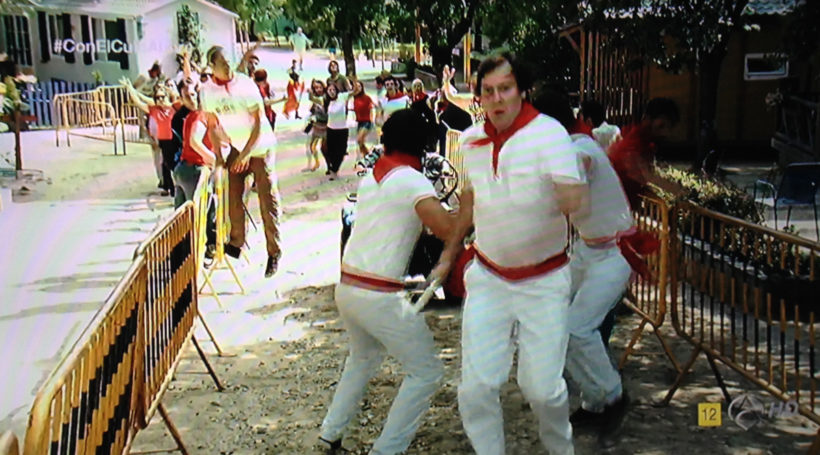 An adaptation of the Sanfermin Running of the Bulls was featured in the latest episode of this TV series “Con el culo al aire“ from Antena 3. Now in its third season, this episode number 8 is set in a camping site. The Spanish group in the camping site wish to show their appreciation to Hans, a Swiss hotel owner in love with Lola (Goizalde Núñez), who has offered work in his Swiss hotel to the group. In their fervor to show their appreciation and to ingratiate themselves with Hans, the proposal suggested byÁngel (Raúl Fernández), Rubén (Julián López) and Paulino (Janfri Topera) is to organize a Sanfermin Running of the Bulls in his honor “because that is what the foreigners like most about Spain”. You can watch the video here and if you really want to learn about running in the event or showing someone else how to do it, visit A quick guide to the running of the bulls.

Like any well-made TV series, it has some memorable lines and scenes. The mechanism of these “Homemade Sanfermines” consist in running between some roadwork fencing and being chased by a “bull” on a bicycle wheel. In the storyline, the trial is successfully completed but when they are ready for the real thing, they set off a rocket to start things and it is then that Lola appears on a quad with a set of stag’s horns on the front. The thing gets out of control and the Swiss man ends up wounded. The web site of this series highlight the Sanfermin aspect with a title “San Fermines locos en el camping“. Some of the best lines are familiar to regular Sanfermin bullrunning fans “The most important thing in the running of the Bulls is to warm up beforehand”, “In the bullrunning, three things are essential: a rolled-up newspaper in the hand and a pair of balls”, “In Pamplona, they call me The Kamikaze of Estafeta Street”. 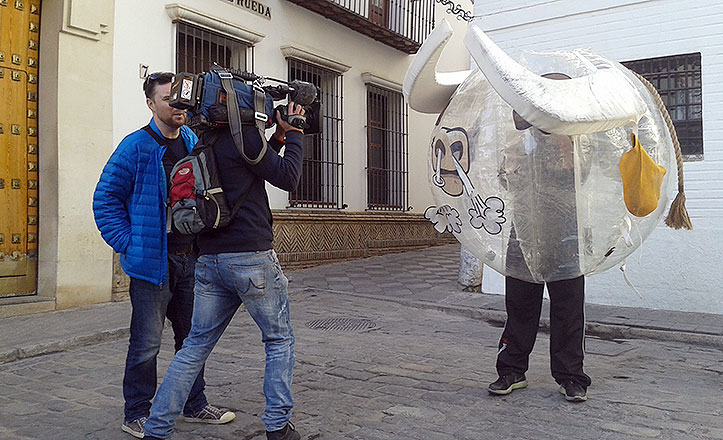 The CBS TV program –The Amazing Race All Star– recently dedicated one of its episodes to the concept of the Sanfermin Running of the Bulls. The adaptation of this event is contended by opposing couples in “Awesome Races” and it was broadcast last Sunday, at prime time, with an episode entitled “Bull Down”” which was shot in Seville in December, 2013, with an adaptation of the Sanfermin Bullrunning also being included.

The participating couples came from Switzerland and the first test that they had to confront brought them to the Hairdresser’s of Manuel Melado. There they had to shave a balloon. The second test brought them to a class of flamenco dancing and the third one was a simulated running of the Bulls. This scene explained the title of the episode, “Bull Down” and it is the scene that is used in promoting the show from CBS. The images have been shot in the downtown street of Sierpes and surroundings. The competitors had to complete a running inside large air balls with horns on them. As far as we can make out, it seems real good fun because, as well as running, competitors can also try to knock other runners down to prevent them from reaching the finishing line. In the trailer we can see how they bash each other around and it is not surprising if we remember that the winners of this competition will receive a million dollars in prize money. In this particular episode, the couple of cowboys were eliminated. 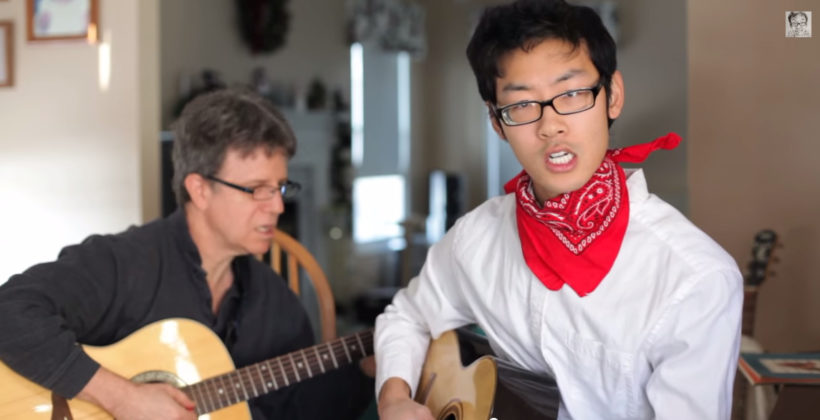 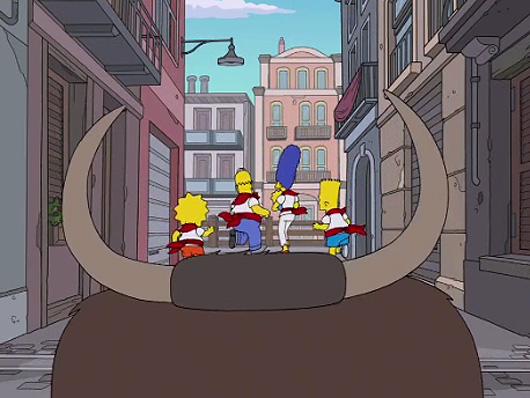 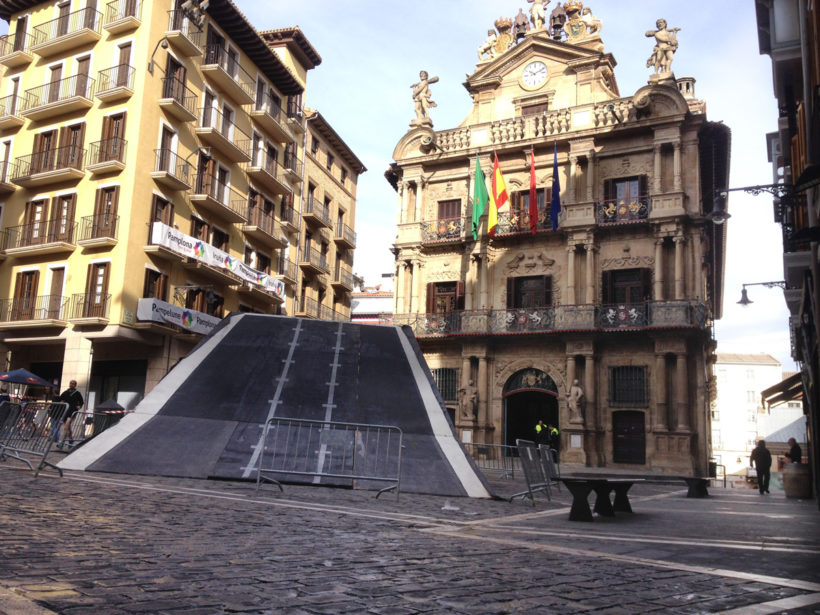 Video made in Mikel Ollo from Sanfermin.com/booking 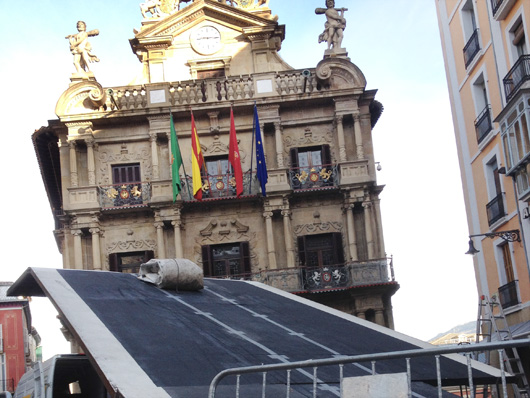 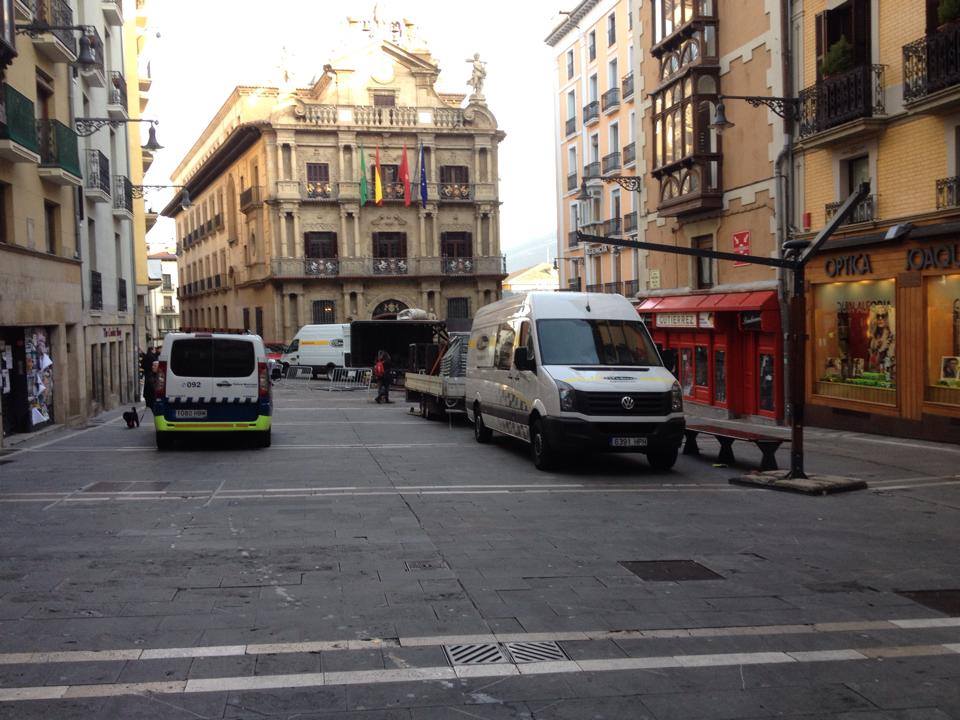 Next Monday – 31st of March – FROM DAWN TO DUSK (From 10.00 a.m. to 17.00 p.m.) we will meet in the Plaza Consistorial de Pamplona (Pamplona City Hall Square) all dressed in white. If you wish to come, send us an e-mail to info@lastlap.com under the title “Quiero vivir la experiencia Red Bull”. The first 50 people who write us will get a place in these San Fermin Red Bull X-Fighters. Sign up now. 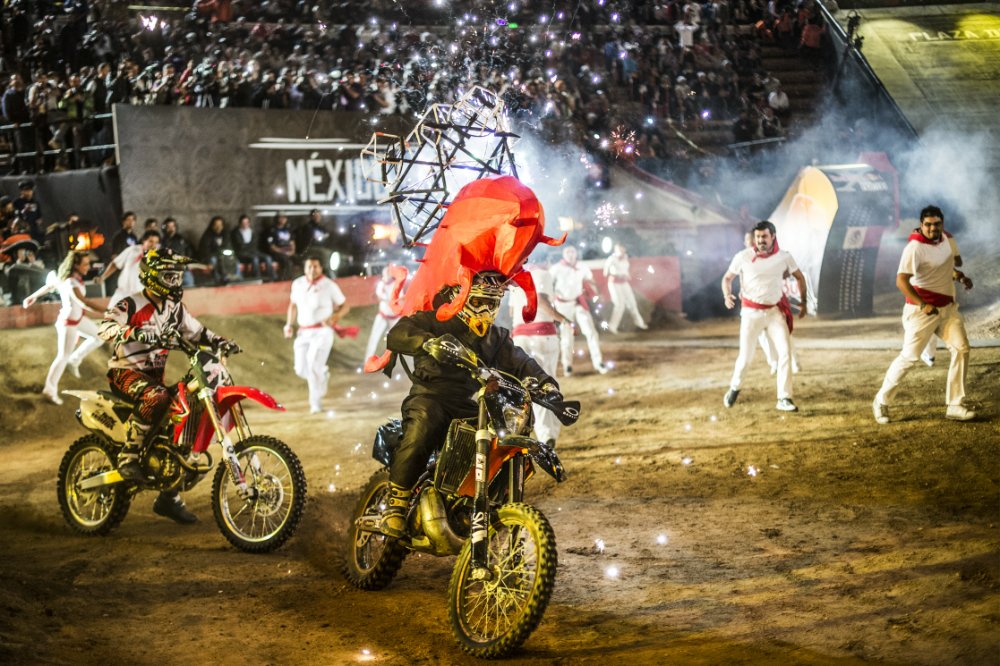