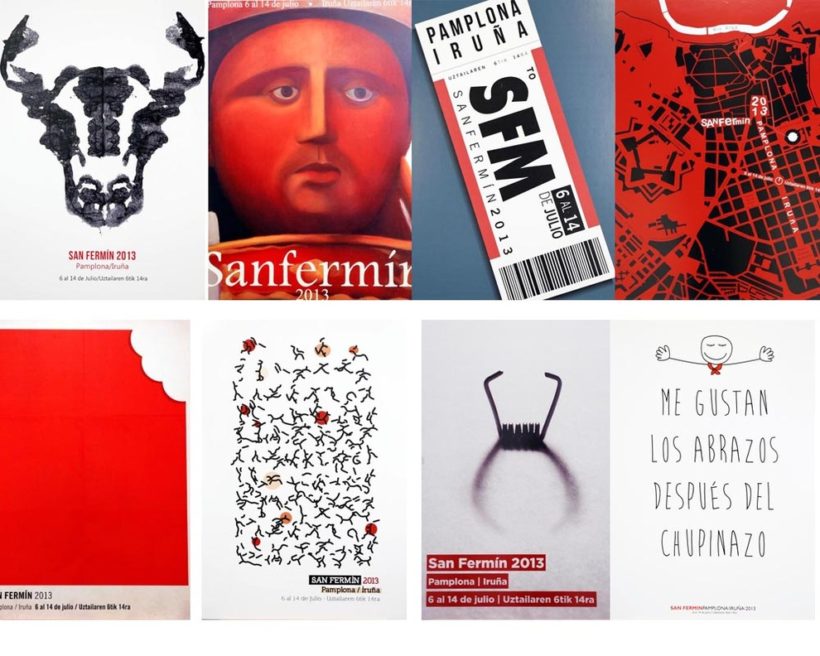 Pamplona citizens can now start voting at the web page pamplona.es, or through the telephone number 010 – from Pamplona- or +34 948 420 100 -from calls outside Pamplona- and also at City Hall Civivox buildings from tomorrow

From among these 8 finalist posters will come the official poster to announce Sanfermin 2013. The votes of the citizens of Pamplona will decide the winning poster over the next twenty days. It is now possible to cast votes at the City Hall web page, or by calling the telephone number 010 from inside Pamplona or the number 948 420 100 – for all calls outside the city. As from tomorrow, it will also be possible to cast votes from the Civivox. Centers located in Pamplona. The original posters will be exhibited inside the Palacio del Condestable building in calle mayor street. Voting will close on the 29th of April.

The jury which made the selection from all the entries have found the following positive attributes in each of the posters chosen to be a finalist:
Cartel 1 Nº30, “Locos por la fiesta”. David Arratíbel: “This is an allegory of the Rorschach test where a varied interpretation of one of the signs of the fiesta is being sought for. It should be underlined that the technique used is the same as watercolors with a tracing of the test.”
Cartel 2 Nº 207, “Santo”. David Alegría: “A figurative theme that suggests the work of Botero, choosing a close-up foreground as if appealing to the viewers.”
Cartel 3 Nº 109, “Momentos de San Fermín”. David Alegría: “This is a Naïf work, simple, graphically well-worked out where the idea of going for something positive is appreciated”. They jury has stated that it has not failed to comply with the rules of the competition in not having the main sentence in the Basque language.
Cartel 4 Nº 125, “Check-in”. David Alegría: “Modern; an artistic call to the fiesta, a calling in the shape of a fictitious airport”; David Arratíbel:” Very Pop, sublimating an everyday object.”
Cartel 5 Nº 146 “Canan”. Txaro Fontalba: “Good, modern, with important positive details such as the river in the form of horns and with good applications and other skills.
Cartel 6 Nº 94, “Muelle de pinza”. Txaro Fontalba: “this is a poster along the lines of the visual poetry ofJoan Brossa  or the work of Chema Madoz, with impeccable photography and nice play with the typography. Suggestive.
Cartel 7 Nº 308, “Naïf”. Txaro Fontalba:”This follows the line of the ideograms and creates a special texture ” David Arratíbel, also points out: “It is worth viewing the piece live and in its natural state because it has a metallic touch and the technique used is similar to that of silk screen printing”
Cartel 8 Nº 444 “Ñam”. David Arratíbel: “This is playing with a Pantone color list. This is the 485 red, the typical red of Sanfermin. The touch resides in the bite that plays with the idea that you like the color of the fiesta so much that you eat it up.”