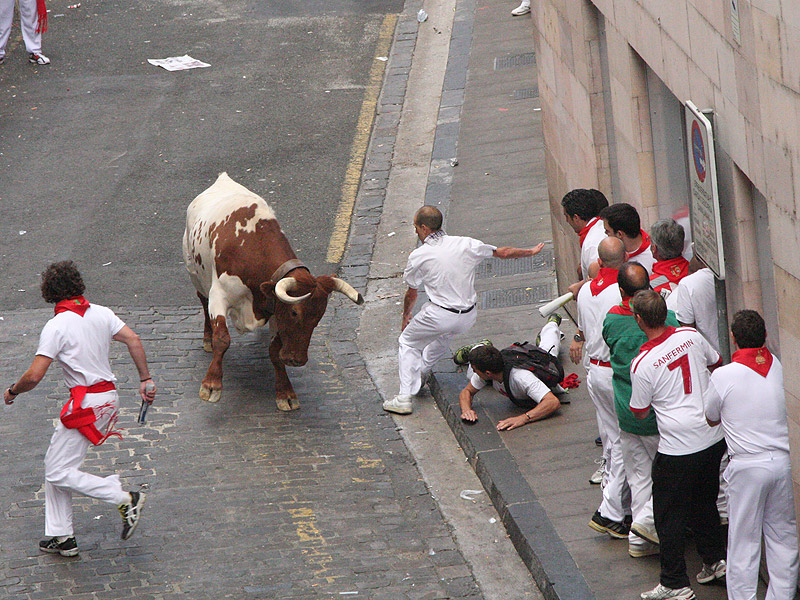 As the danger in today’s running of the bulls did not come from the bulls – they all stayed together and ran a fast compact run from start to finish all the way to the bullring – the element of risk today has had to come from one of the steers that accompanied the Tajo y la Reina fighting bulls.

This particular steer began its run in a slow fashion as soon as it came out of the pens at Santo Domingo. It soon lost contact with the other steers and, of course, the bulls were well out of sight by then. When it reached the City hall square, it decided to turn round and head back down towards the pens. And, as it did so, it caused a few hearts to skip a beat and even gave a fright or two to some of the runners still on the course, because in the excitement of the moment some people don’t stop to consider if the animal is a fighting bull or just a steer. Although it is taken for granted that the steer will not cause a goring, this particular steer did shape up as if to make a charge and caused a few runners to dive to the ground just in case.

Half-way down the slope, without more ado, the animal turned back up again and it covered the rest of the course in normal fashion at a quick trot. Of course, it arrived a couple of minutes later than the rest of the pack who, by then, were all already safely locked in their pens inside the bullring. There a young australian have been gored.