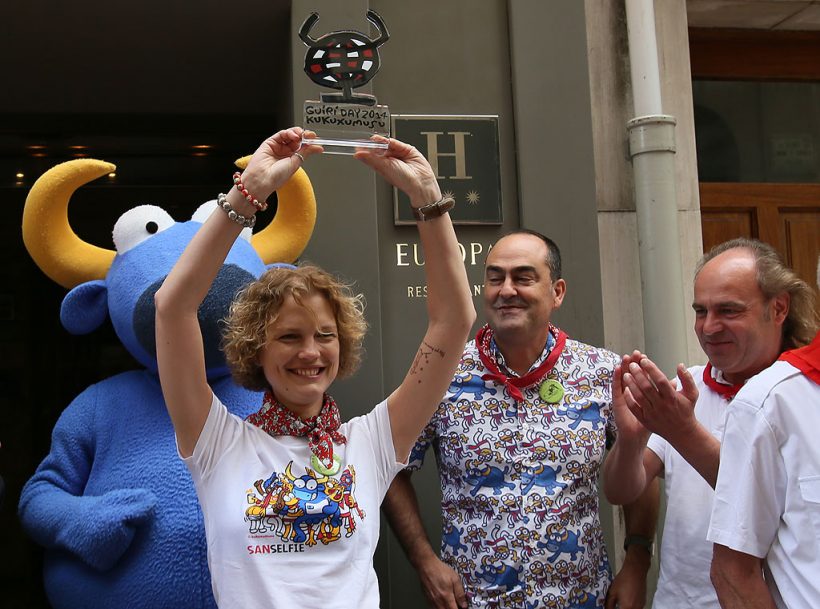 Painter and photographer Anna Nelubova today received the XI Guiri de Sanfermin award. This accolade is given each year to some particular foreign visitor by the Kukuxumusu firm in recognition of the presence and contribution that the foreign visitors make to the success of the Sanfermin fiestas.

The award was handed over by Mikel Urmeneta, founder-member of Kukuxumusu, at the Europa restaurant on the same day as Guiri Day is annually celebrated and on this its 17th consecutive edition. The award is in homage to all the foreigners who visit Sanfermin.

After receiving the award, and accompanied by some of the winners from previous years, Neluvoba shared her first impressions about receiving this Guiri de Sanfermin 2014 Award: “To be given the Guiri del Año Award is something very important to me and it pleases me very much, because it also recognizes my work as a bullfighting painter.” Besides, Anna is charmed by Pamplona: “This is all very different to anything I have ever seen before and the people here are very nice and kind as well as being good fun and I feel I have been very well treated ever since I arrived”.

Born in 1979 in Moscow, Neluvoba is rather a unique case within the bullfighting art world, given her origins. She arrived in Spain in 2007 for the first time, as just another tourist, but she soon discovered the bullfighting world and became enraptured by the liturgy and by the fighting bull itself. Ever since then she has been returning often to exhibit her work, always directly concerned with the world of bullfighting.

Last year she discovered Sanfermin for the first time and she was impressed deeply by the explosive combination of partying and bullfighting events. When asked what her first thoughts were when she discovered the Sanfermin fiestas, she does not hesitate to reply: “It is certainly a unique fiesta and very different to anywhere else in Spain and I believe Sanfermin would not be the same without the foreigners as they help to make the fiestas so well known all over the world. For example, if, Hemingway had not written “Fiesta,” nobody abroad would know what the Running of the Bulls and Sanfermin” was all about. In 2014, she has returned to Pamplona, where, in addition to receiving the Kukuxumusu award, she is also holding an exhibition of her work at the Maisonnave hotel.

After the ceremony of handing over the award, the attendance enjoyed some drinks and tapas at the restaurant before going off for lunch at a nearby country home close to Pamplona, where they enjoyed a meal with staff members from the Kukuxumusu firm.

Among those present were former winners such as the North-Americans Lore Monnig (2005) and Catherine Donnell (2012) as well as the Swede, Lars Ingvar Jungefors (2006), the German, Manfred Walloschke (2007), Englishman Frank Taylor (2009) and the American woman, Catherine Donell (2012).