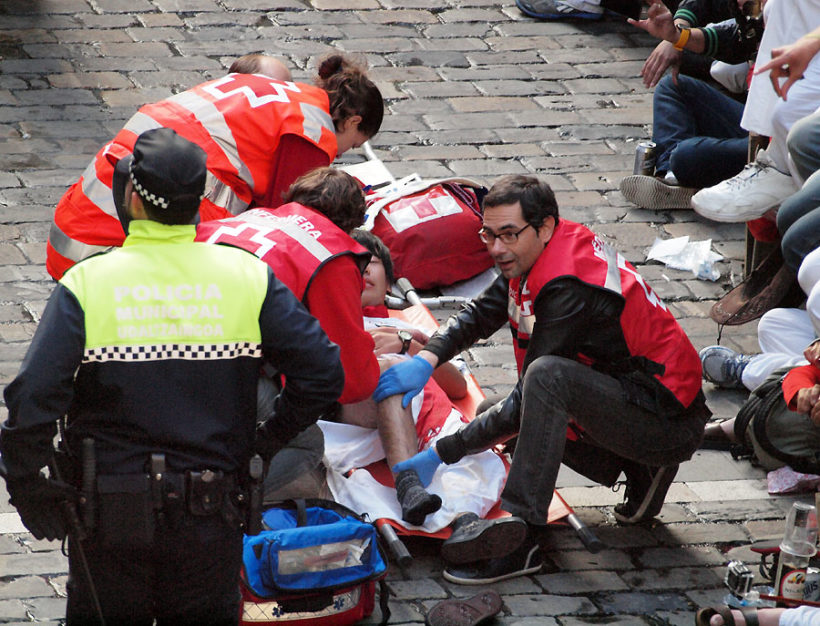 Shortly before noon today the Navarra Public Hospital Complex issued a report stating that a young twenty-three year-old Englishman has been admitted to hospital suffering from a thorax contusion and hemo-neurothorax with several fractured ribs. His condition is serious. It seems that he did not require immediate attention after this morning’s bullrunning, but rather, only began to feel bad several minutes later and he was taken to hospital by normal ambulance and not the special services that work at the running of the bulls. Thus, his removal to hospital was not covered by the media at first.

One of the two injured runners suffering from contusion at this morning’s running of the bulls is a Japanese man Y.Y. who is aged 23. He is from the city of Okayama. According to the statement issued by Navarra Public Hospital, he is suffering from contusion to his right knee and to his right elbow after suffering a spectacular fall at the Mercaderes stretch. He has already been discharged from hospital this morning.

It is not very usual to come across any Japanese runners at the Running of the bulls and much less to find an injured runner.

In fact, checking our data file, there is no record of any Japanese ever being gored in the bullrunnings, and there is only one case of an injured runner.

This was a runner by the name of Kayoko Enokizono, who suffered an injury to his knee on the 11th of July, 1994.

In addition to the Japanese runner, a 36-year-old man from Pamplona suffered bruising to the ribs, which is not serious. He remains in observation.

Meanwhile, three of yesterday’s five injured runners remain hospitalized. 34-year old A.G.O. from Guipuzcoa is suffering from thorax contusion to his left hemonuerothorax and multiple bruising to his ribs. His condition is serious.

V.O.M. from Valencia is suffering from a fractured shinbone and peroné.
The runner from Navarra, M.J.B. who suffering a six-centimeter goring to his perineal region is making satisfactory progress.

Photos and Info Running of the Bulls 8th July.