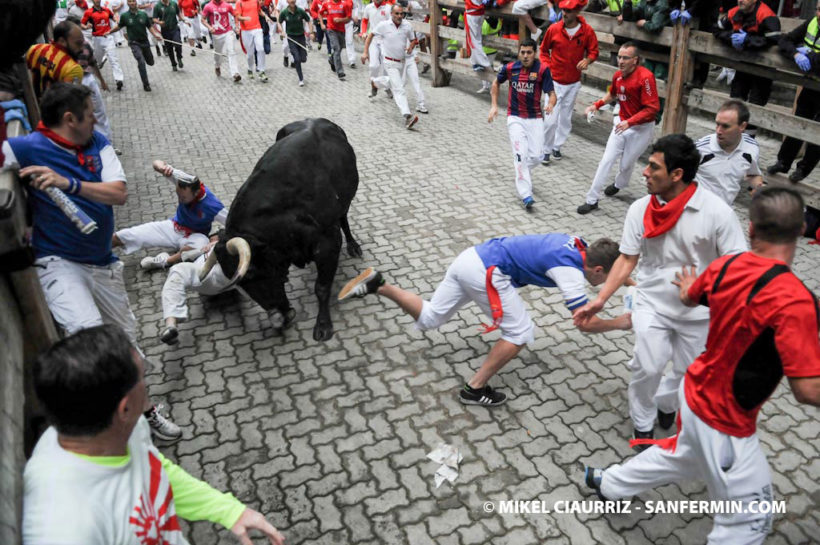 North-American, Bill Hillmann received goring at the Telefónica stretch as he was heading down into the bullring, as can be seen in this sequence of photos taken by photographer, Mikel Ciáurriz. The young man had just tripped up and had fallen face up on the ground when the Victoriano bull gored him in his right leg.

Hillman suffered two gorings, both to his right thigh. The medical report states that there is “a wound to his interior lower right thigh in the distal area near to his knee and another wound in the interior face of the lower thigh. The nerve area is not affected.” His condition is said to be “not serious.”

A report on his condition will follow shortly. Hillmann is a thirty-two year-old from Chicago. He recently published the book, “How to survive the bulls of Pamplona”, in co-authorship with John Hemingway, Joe Distler and Alexander Fiske-Harrison, as was reported by Sanfermin.com just a short month ago. In addition, he has published an article on our web page, entitled “Sleepers”. Hillman is an experienced runner, having been a regular runner for more than a decade. 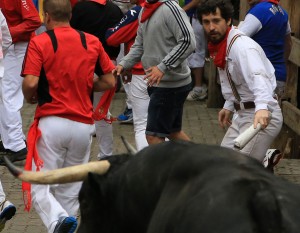 Bill Hillmann, moments before getting the goring. See the full sequence below. 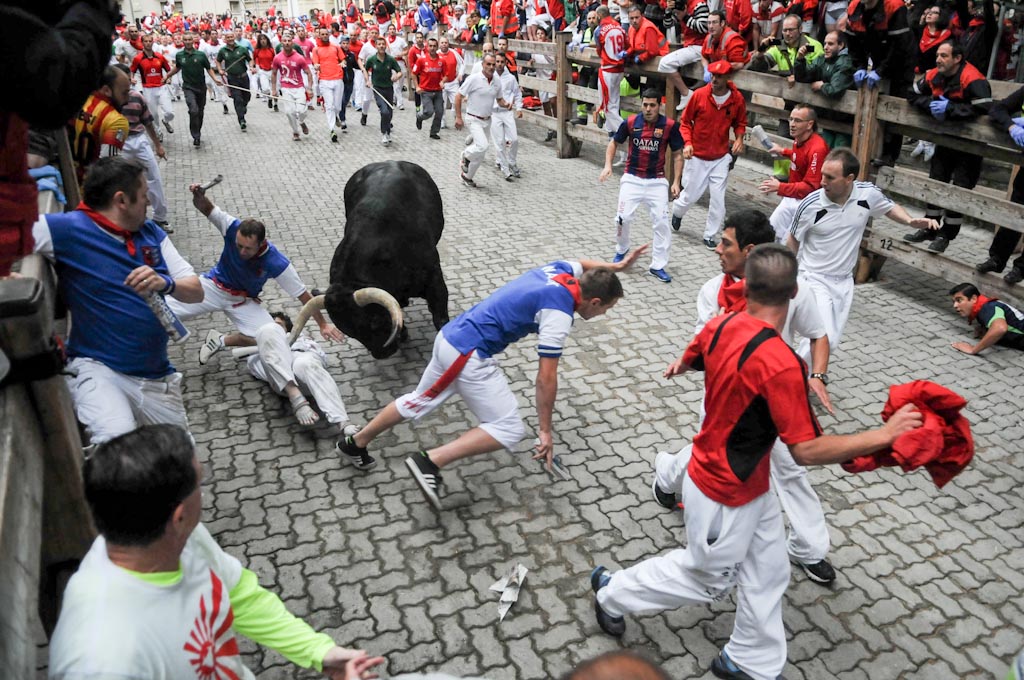 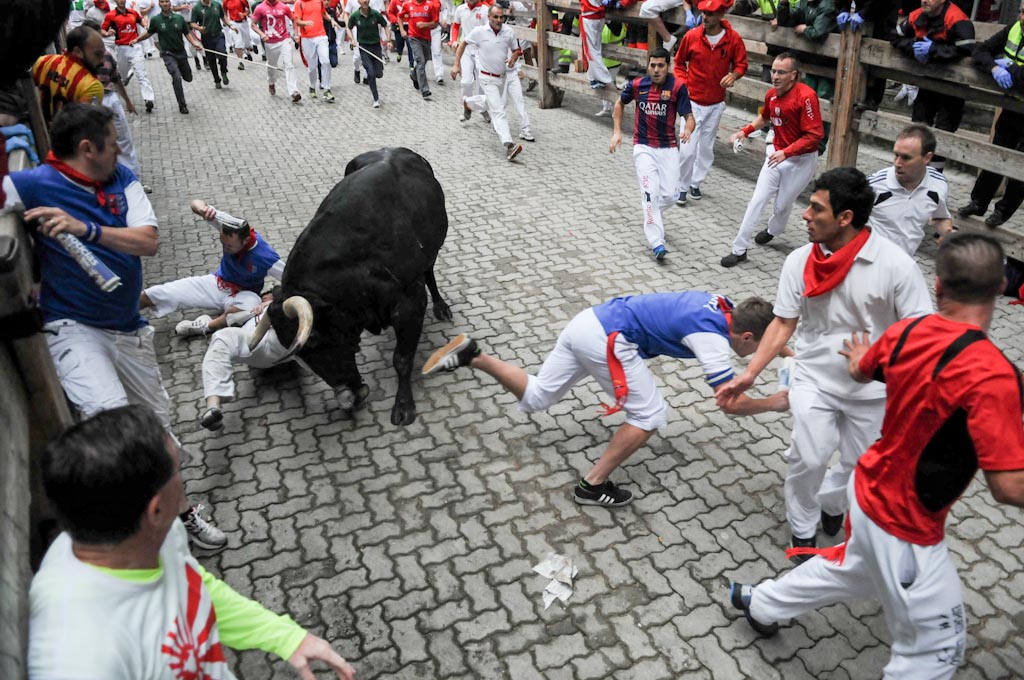 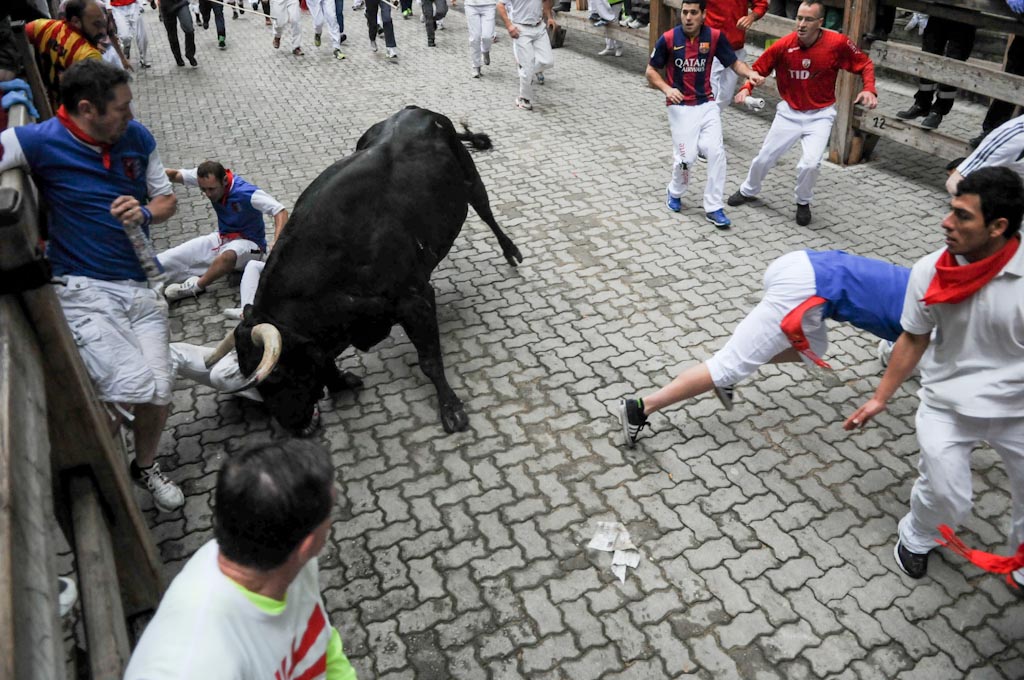 Hillmann’s Facebook profile provides some details of his relationship with the Sanfermin fiestas. His main photo on this social network is precisely one that shows him helping pull out some people from the pile-up crush in last year’s running of the bulls in the bullring. In addition, he tells us that upon his arrival this year to Pamplona, on the 6th of July, he lost his passport, laptop and some medication.

Mikel Ciaurriz, the photographer who captured the photos of Bill Hillmnan being gored, paid the runner a visit this morning in the hospital. Hillmann was in good form and accompanied by his girlfriend. 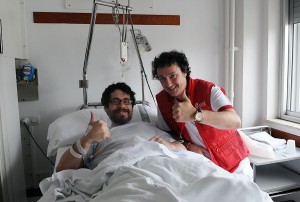