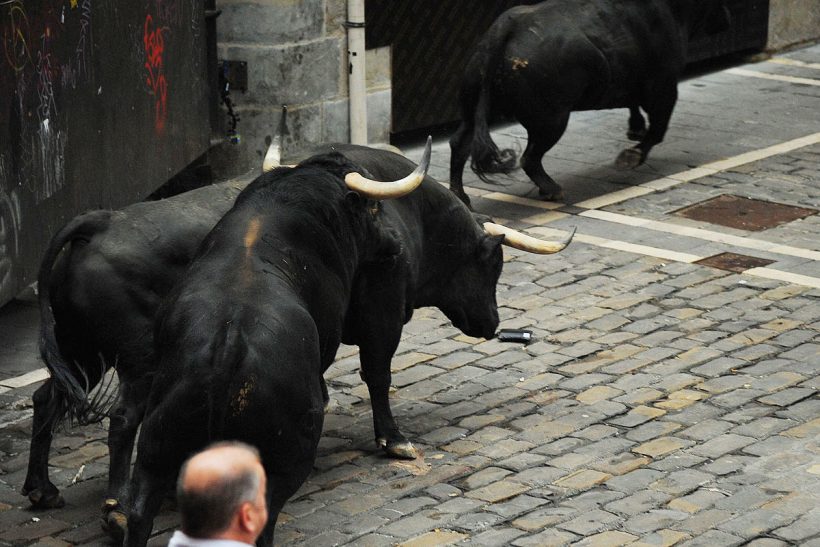 This year’s sixth Running of the Bulls had few incidents of note, and few reasons for any runners to be sent off for hospital treatment. In fact, only a mere five runners needed some treatment for contusions and bruising.  But funny enough, at least one runner may end up going to the lost property office or to the local police station, after today’s running.

Bulls and runners are moving towards the corner of Mercaderes  at a fast pace, almost queuing up to enter Estafeta Street in line, when one of the runners– dressed in short pants with a white tee shirt and a red necktie – drops his wallet from the right pocket of his pants. Maybe he did not even notice it, or maybe he simply thought this was not exactly the best moment to stop and pick it up. Three big bulls were coming up close behind him and they were not likely to show much consideration for the runner’s dilemma.

The pack of bulls sped past and the forlorn wallet still lay on the ground, alone and bereft of an owner.  In the final snapshot of this series of photos from Juantxo Erce, one of the Victorianos bulls seems to be almost smelling the fallen wallet, as if to divine the mystery behind such a curious object.

Should anyone have found the wallet, we would hope that it would be handed in to the lost property office. If the owner wishes to recover it, he should pay that office a visit. And perhaps in the future bear in mind that it is better not to carry any kind of objects on you if you are going to take part in the Sanfermin Running of the Bulls.